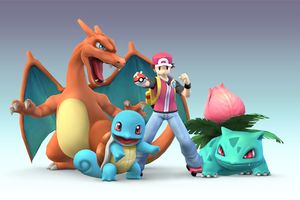 Pokemon Trainer is one of the most unique characters, having access to three fighters in one. However, to prevent players from sticking to only one Pokémon, the developers introduced a stamina mechanic. This means the player must switch Pokemon from time to time. So to play Pokemon Trainer effectively, you must use not one but three different playstyles during a single match.

Pokémon have a special property called stamina. Pokémon start out with 120 stamina points. 1 stamina point is used per second and each attack also uses 1 stamina point. Pokémon with 0 stamina have less power and droop in their standing animation. Pokémon that you are not currently using recover 2 stamina points per second. All changes last as long as it takes for the game to load the character. Pausing may speed up the change. After you change, you are wide open for attack. Dying will automatically change Pokémon.

Another mechanic of the Pokemon Trainer is type effectiveness. Getting hit by a move that is super effective will deal 10% more damage and knockback while getting hit by a move that isn't very effective deals 10% less damage and knockback. Squirtle is weak to Grass while resists Fire, Ivysaur is weak to Fire while resists Water and Charizard is weak to water while resists Grass. However, the Pokemon does not resists themselves (Charizard doesn't resists Fire etc.), and it only applies to those three types (Squirtle isn't weak to Electric attacks).

The trick to mastering the Pokémon Trainer is knowing when to switch Pokémon. When you are desperate for a KO, or your chance of being KOd is a little close for comfort, change to Charizard for an Offensive and defensive boost. You lose speed when you do but you get a triple jump as opposed to a double because Squirtle and Ivysaur's third jumps aren't all that reliable to escape from a dangerous situation.

Finally, if time is running low and you think you can just squeeze in one last KO, switch to Charizard to try and land a good smash attack. However, Ivysaur's Up Smash attack will finish almost any character off, but it takes a while to execute.

How to select your starting Pokémon[edit]

In Tourney Mode or The Subspace Emissary:
Highlight the Pokémon Trainer on the character-selection screen and tap

, and it will start glowing instead of the Trainer's. Also, the Trainer's name will be replaced with the chosen Pokémon's.

If the Trainer himself is selected, the Pokémon you start with will be randomly decided.

Squirtle is a middleweight character with incredible speed. Although its special attacks don't really stand out, most of its other moves are very useful. The Down smash shouldn't be used so much because Squirtle's Up smash is just better, and covers both sides. Squirtle also has a fast turnaround animation which you can use repeatedly to confuse your opponents.

Squirtle is least affected by type effectiveness as only Ivysaur has Grass attacks and a majority of the cast uses Fire attacks. However, it is most affected by the Stamina stat as its KOers get weak as it tires.

Another very important bit of information is that you are close to invincible when using withdraw(Side B). You can even evade some final smashes if you timed it correctly!(eg. Samus' Zero Laser)

Ivysaur is a middleweight with average speed. It's there to out-range its opponents with projectiles and high ranged and at the same time quick attacks. Despite its position in the Pokémon swap order, Ivysaur actually has more knockout power than Charizard. Ivysaur has a mix of quick attacks which do little damage and slow attacks with incredible knockback. Because of the slowness of its knockout moves, Charizard usually still remains the best choice for knockout attempts. Ivysaur is also a good projectile spammer. Its up smash has incredible power behind it and can get KOs if hit. His back and front aerials also have a lot of range to them, and its up and down airs are very strong.Ivysaur's rapid Bullet Seed attack can easily damage flight characters like Pit and Meta Knight, and stop other characters using their down smash on it if used properly.

Despite its many advantages, Ivysaur has mediocre recovery, having average jumps and a tether for its up special.

Ivysaur grabs with its vines. It is one of the least laggy tether grabs in the game.

Charizard is a slow, heavy character with very strong attacks so use it to quickly polish off the perfect attack strategy. Charizard's front and side tilts are great and fast attacks. Side tilt has some knockback while up tilt can keep enemies in the air. Its front smash is very strong but also very slow, so the front tilt will be useful when there is not enough time for a smash.

Charizard is also one of the three characters that can glide. However, it has bad startup for a glide, and it is kind of slow. 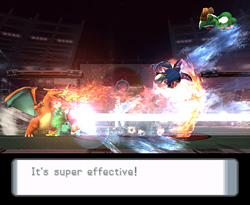 Triple Finish: When either Charizard, Ivysaur, or Squirtle take the Smash Ball, all three come out to fire heavy damage to the enemy. Charizard fires Fire Blast, Ivysaur fires Solarbeam, and Squirtle Hydro Pump. And, of course, it's super effective. The best way to use their final smash is to go to the edge of the stage and use it.