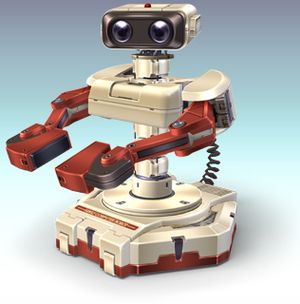 R.O.B. needs to be unlocked

R.O.B. has very good moves both on ground and in the air. All his tilts are very fast moves with less knockback that should be used to push back and pressurize an opponent. The down tilt also has a chance to trip the opponent which is somewhat useful. His down smash is amazing and is always good to use, his forward smash is very strong, and he also has a strong up smash with somewhat limited range.

In the air, R.O.B can either approach with his forward air which is a very fast aerial with considerable knockback, or try to K.O. with harder to hit but more rewarding neutral and back aerials. The back aerial will be especially hard to hit with since it is a rocket move and it doesn't hit a wide area, but the neutral air hits all around him and sends the opponent far. His down aerial is also spike which is useful because R.O.B. can easily make it back to the stage after using it, as with any of his aerials. 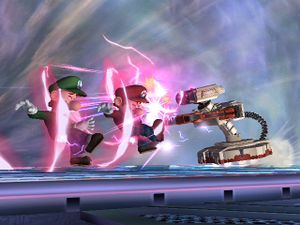 Diffusion Beam: R.O.B. fires a continuous beam from its eyes. Great for knocking an opponent off and guarding the edge. The cool thing about this move is that R.O.B. can use his other moves (besides Robo Beam) at the same time. So you can pull off some awesome combos with Gyros and Grabs. This Final Smash is not forever however so KO the enemies fast.

There's also a glitch where rob can jump into the bridge of eldin when it's broken and right as the bridge is forming, with good timing, you can use his Final smash FOREVER!