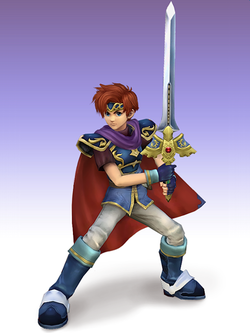 Roy, along with Mewtwo, makes his amazing comeback in Project M, after having been inexplicably and unjustly cut from Brawl. As with Mewtwo, Roy's moveset has been buffed from Melee to PM.

Roy is a lightweight character who is fast (common amongst most lightweights), but also very powerful, as he possesses several powerful attacks and finishers in his moveset, making him one of the strongest lightweights in the game. His amazing power and range, combined with above average speed, makes him a versatile character for you to get the hang of.

Roy's ground game is one of the biggest strengths within him. His side smash is considerably his most reliable finisher of his attacks, being a fast and powerful attack with great KO potential should he sweetspot it. His other two smash attacks are also very powerful are good finishers. He also possesses good edgeguarding potential, as his Flare Blade (neutral special) is reliable at gimping and ultimately, KOing those who attempt to recover. His down tilt is the perfect combo starter, as its relatively high vertical base knockback allows you to set up air combos even at low percentages. Roy also has a fantastic grab game.

Keep in mind that Roy still has his flaws, even with the buffs he received. His low weight, while making him not very easy to combo horizontally and impossible to combo with Fox's shine (since it knocks him down instead of pushes back), makes him easy to KO horizontally as an exchange. He is, however, susceptible to vertical combos as a result of his high gravity and falling speed. Additionally, Roy possesses one of the worst recoveries in the game, which is, again, exacerbated by his high gravity and falling speed, though he can use the his side special, the Double-Edge Dance, to aid himself in recovery, as each usage of the first hit bounces him slightly, similar to Marth's Dancing Blade; even when this is used, it still remains as among the worst recoveries in the game. Roy can be conclusively considered as a glass cannon as a result of his combination of powerful attacks and ease in being comboed and KO'd in general as a result of being an easy-to-combo lightweight with a lackluster recovery.