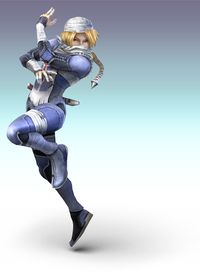 For many of the advanced strategies regarding Zelda/Sheik, many players turn to Sheik, but that doesn't mean Zelda isn't a good fighter too; they are different and attract different types of people with different playing styles.

Sheik is still the fast and aggresive fighter like in Melee, but her attack power is severely weakened. She also lost her old down throw chaingrab. This loss of power means most people turn to Zelda when it comes to actual KOing. Regardless, Sheik is still a fun character to use and is pretty good without relying on Zelda.

When using Sheik, try to store as many needles as possible, they usually aren't used to actually attack, more like defend, they can distract people, destroy projectiles that are about to hit you…the list goes on.

How to start as Sheik[edit]

In Tourney Mode or The Subspace Emissary:
Highlight Zelda on the character-selection screen and tap

, and it will start glowing instead of Zelda's. Also, Zelda's name will be replaced with Sheik's. 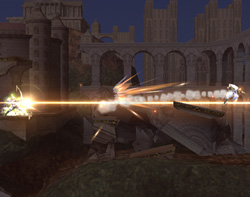 Light Arrow: Sheik draws a bow and fires the extremely powerful Light Arrow, which moves at light speed though opponents.