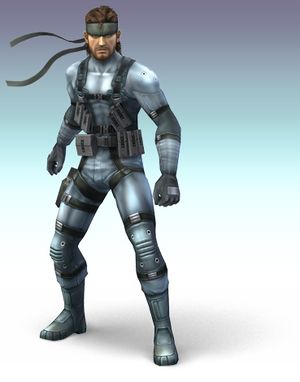 Snake needs to be unlocked

The master gunman from the world of Metal Gear Solid makes his debut in SSBB.

Snake is an extremely powerful heavy-weight character that has all manner of gadgets and weaponry. He has very good smashes, great projectiles, and strong throws, making him very powerful. Sadly, he can't do very well in the air, and should be kept on the ground most of the time.

A powerful recovery technique used by the pros is the 'C4 Jump'. What you do is, when you get knocked off, use your Cypher to get close to the stage, and then, right before the cypher disappears, drop a C4 and blow it up. If you time it right (when to drop it during the Cypher boost, in particular) you will hit Snake with the blast of the C4, allowing you to use another Cypher! This lets Snake recover over incredible distances!

When using the final smash, try and hit a little bit below the opponent about 3-5 times to successfully K.O. your opponent. 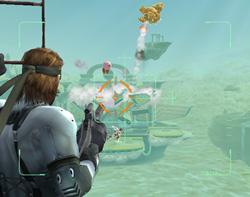 Grenade Launcher: Damage:16-18% for each grenade that hits

Snake yells 'It's showtime!' before calling in a helicopter and starts firing grenades from the passenger area. The weapon only has two magazines, with six rounds each, so it is best to simply unload as many grenades as possible before the time expires. The grenades deal a considerable amount of damage and has a fairly large area of effect. They do have a slight delay, though, so aim where you think an enemy will be in half a second, instead of where they are at the moment.

Should be easy. Just attack him before he issues his final smash moves or if he uses his final smash you're doomed. You are significantly faster than ganandorf so try to find high ground and barrage him with your projectiles. This will also help you avoid his very powerful close range attacks. If he does get close either run away or get behind him and perform snakes high knock back combos. Then barrage him with long range weapons again. Stages that move or large stages will help you face him.

King Dedede is a big target for all of Snakes basic and special attacks. Just watch out for many of dededes hammer attacks. About the same story as Ganandorf, but he has a recovery move. He has a very (very) poor air game so when he uses his recovery move, he is most vulnerable. If he is at high percentages, shoot him with a guided rocket. If not, fly over to him and kick him as far as possible or even wait for him to land and perform combos.

Always throw things at him, including grenades ,before he gets close to you. If he does get close, his direct attacks are very devastating against Snake. Remember that you are much faster than Bowser. If Bowser gets close, use one of Snake's powerful knock backs repeatedly or use a dash attack to put some distance between you and Bowser. Try to stay either above or below bowser as he is very powerful on a horizontal plane. When you are below him, your upward kick, mortar and grenades are very helpful. Being above is a worse position, but you can throw grenades use the guided roctets or place c-4 and then have him chase you into it. Bowser's only recovery move is horizontal, so remember to use that as well. Stay away from flat maps like final destination. Instead use moving courses or courses with lots of platforms

The key to this battle is using his speed against him. Your projectiles will not be as effective against him. Instead, place c-4 or land mines for him to set off. If you can dodge his speed attacks near the edge, he will almost certainly fall off. He has weak recovery moves and he is very vulnerable afterwards. Use that to perform a high knock back move. If you have time, fire the rocket at his feet. It should knock him off. Staying on a different level against him is also helpful.

About the same strategy as Ganandorf. His close range attacks are very powerful and have massive knock back. Stay away from him for the most part. He has no recovery moves so knocking him off should be first priority. Rack up percentage with projectiles and drop down on him and use combos or a foot rocket to blow him off. He also has no projectiles so using the guided rocket won't be an issue.

About the same strategy as Bowser except that he is quicker. His lasers are deadly and quick so stay away if at all possible. Fox excels at combos but has no real knockout moves. His recoveries also aren't the greatest. Stay above him and pummel him with grenades and guided rockets. If he is directly below you, drop down and blow him up. You completely overpower him close range. Send him off with a foot rocket and if he comes back hit him with a guided rocket or punch him off. His aerial game isn't overly powerful either.

Pit will be more of a challenge. Not only does he have one of the best recoveries in the game, but he has a reflective shield. You can get under his shield by using the mortar, and the grenades will also do damage. For Pit, you will need to get some of your damage through items. He is a very light character so it won't require to much percentage but still be careful. He is pretty fast so be careful to get out of his combos. Land mines are also effective against Pit. The best strategy against him is to avoid his arrows and combos while focusing on getting behind him and picking up items.

Marth is very good. Stay away from close contact as his combos are menacing and his dolphin slash. He has no projectiles and no real horizontal recovery so use this to your advantage. Shielding will be very important against him and try to get behind him when she is using his combos because they are long. Then you will be able to punish and at high percentage use the foot rocket. Flat stages will be the best when fighting him. Also, try to dodge his finishing attack because if he misses he will kill himself.

Link out ranges you in his regular attacks so for the most part you should stay away. He has a variety of projectiles and attacks, but they are not nearly as accurate or as long range as Snake's. He doesn't really have a recovery and he is fairly lightweight so he will be ko-ed easily. Stay away and keep on moving courses so he shouldn't be a problem.