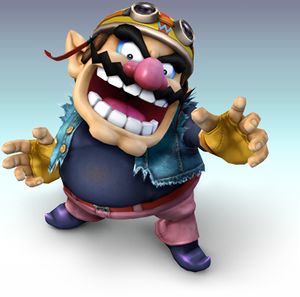 Wario is a unique character, as he is heavy but has some very quick moves. Wario's greatest advantage is his aerial movement speed. His Up+A is a massive clap which has high knockback and heavy damage. His Forward smash, when fully charged, has good knockback as well. However, Wario's main problem is that his attacks all lack range. 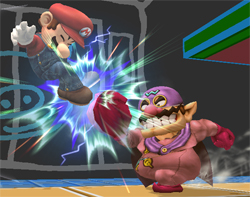 Wario-Man: Wario transforms into Wario-Man. When he is Wario-Man his standard attack creates a flurry of punches, he is much faster,invincible, and his moves are twice as fast. His Forward Smash slides him across the stage, his Up Smash sucks opponents in, and all his attacks can be interrupted before it ends. His aerials propels himself upwards except his Downwards Air Attack, which sends him downwards. His fully charged Wario Waft Instantly KOs and uncharged Wario Waft paralyses foes. Don't use his Wario Bike though, or you will run off the stage at high speeds, SD'ing yourself.