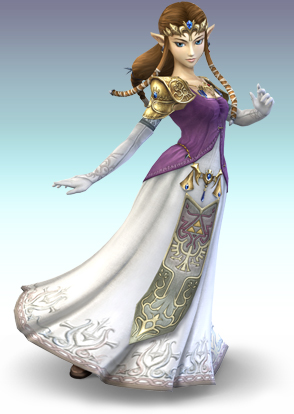 For many of the advanced strategies regarding Zelda/Sheik, many players turn to Sheik. That doesn't mean Zelda isn't a good fighter as well; they are different and attract different types of people with different playing styles.

Zelda has more strong attacks than she has fast ones, so she is treated like a heavy character. However, she is in fact very light, being not much heavier than Sheik. One thing to remember is that she really only has two special attacks, because transform does no damage, and Fayore's wind is hard to attack with. So the best thing to do is use her standard attack and Nayru's love. Din's fire is really only used to finish off opponents when they've left themselves vulnerable or at the start of the match to get some damage in. Zelda's melee attacks are very powerful but slow. One thing casual players should beware of, is that the change from Zelda to Sheik or vice versa occurs significantly faster if the game is paused while changing. This is cheating, but a tactic sometimes used.

When fighting, most experienced players often stay with Zelda and begin fighting by using Din's Fire immediately. This attack creates a momentary daze against the enemy which allows you to begin casting again. You should be able to get three off before the enemy gets within range of you. Immediately use your teleportation skill to get away from the enemy - tilting your joystick to the right/left so that you appear down field. Now repeatedly use Din's Fire until the target closes in. Immediately use your B skill to deflect their first melee attack against you and immediately go to work melee-ing them. Eventually when you have them on the defense - teleport away again and continue to use Din's Fire.

Zelda has a good ranged grab but it's kind of slow, so it's use is situational.

Zelda is renowned for her "Lightning Kicks" as her forward air, backwards air and downwards air attack is incredibly powerful when hit at the right spot and time. 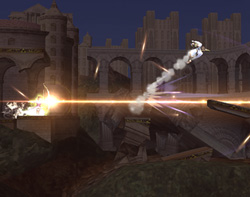 Light Arrow: She draws a bow and fires the extremely powerful Light Arrow. The angle enemies are knocked back is different to sheik's version.