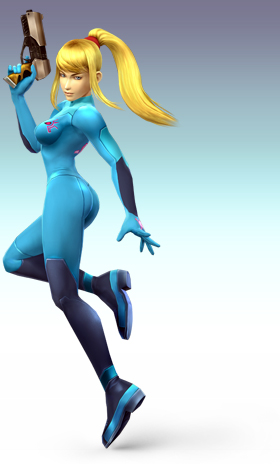 Among the newcomers is a modification to Samus, officially known as "Zero Suit Samus", available by using her Final Smash, by holding the shield button while choosing Samus and picking a stage, or by performing a "Smash Taunt". If the transformation takes place during battle, Samus's armor will break off into throwable items, revealing her "Zero Suit", which is basically a blue jumpsuit. Samus has been revealed in this form to wield a laser gun that can turn into an energy whip. The mentality of Samus's new ability is the first to be seen in a Super Smash Bros. game. It is currently not known how exactly this distinguishes Super Smash Bros. Brawl's gameplay from the identical gameplay traditionally enforced since the first iteration of the series, Super Smash Bros..

They're not designed to be completely defensive, so they have small jumps that limit their ability to recover from huge attacks. This is more of Power Suit Samus's problem more than Zero Suit Samus's.

Zero Suit Samus has a far more advanced game than Power Suit Samus so the experts say. She is very good in close range battles but also has one or two long/short ranged attacks.

Also, her smash attacks are good for combos against slower moving characters.

How to start as Zero Suit Samus[edit]

In Tourney Mode or The Subspace Emissary:
Highlight Samus on the character-selection screen and tap

In all other game modes:
Select Samus, and hold

as you exit the character-selection screen.

How to switch to Zero Suit Samus[edit]

As Samus, either use her Final Smash, or press

Zero Suit Samus grabs with her plasma whip. Great range, but leaves her self dangerously vulnerable if missed.

Power Suit Samus: She radiates a burst of energy that sucks the enemy in and deals around 20% damage. Afterwards, she regains her Power Suit.