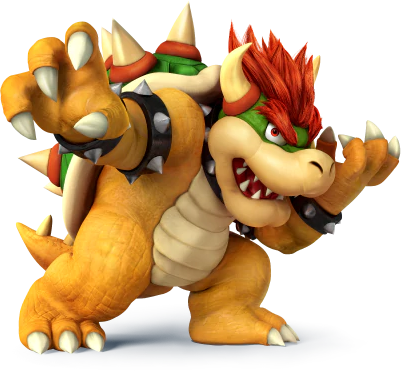 The king of the Koopas is back with a refined fighting style! Bowser is the definitive heavyweight and possesses all the traits one expects a heavy character to have. He is relatively large, feels bulky, has somewhat sluggish attacks and each of them hit with immense power. Bowser's power-packed attacks can rack on a ton of damage in just a few hits, and they can KO very early if his opponents' are just a bit careless. Unfortunately, this strength comes at a cost, as Bowser's weight and large size makes him easy to combo, while his attacks are a bit on the slow side. Nevertheless, Bowser is a great choice for any player that prefers bulky heavy-hitters.

Barring equipment and temporary buffs, Bowser is the heaviest character in the game, as well as the largest. These features make Bowser quite vulnerable to combos. Bowser's ground speed is surprisingly good for such a bulky character, with a dash speed that can rival Marth's. However, his air speed is on the lower half of the spectrum, and he fast moderately fast as expected from a heavyweight. Bowser has a crawl, but his profile is so large that this tactic is practically useless.

It is interesting to note that Bowser possesses a passive form of super armor at low percents. When he hasn't taken a lot of damage, Bowser will not get flinched by attacks that deal very low knockback, a feature referred to as "tough guy" in game. This neat ability doesn't come into use very often, but one particular use is to let you blow through weak projectiles at low percents.

Bowser transforms into this monstrous form first introduced in Super Smash Bros. Melee. Giga Bowser has constant super armor, which means his attacks cannot be interrupted for the duration of the transformation. His attacks are also greatly improved in power, and some have added elemental effects, such as his freezing Down Smash. Note that Bowser reverts to a more feral fighting style while in this form, causing him to use attacks from his appearance older Smash titles like his Side Smash and Back Air Attack. This transformation lasts roughly 10 seconds and is quite good. Giga Bowser's super armor lets you play very aggressively without fear, while his massive size give his powerful attacks a lot of range.