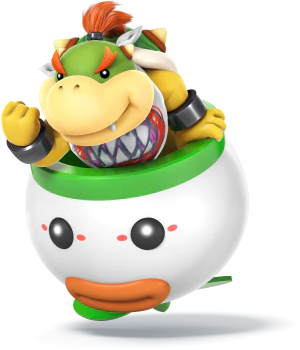 The future king of Koopas enters the fray, joined by Bowser's elite commanders! Armed with his Jr. Clown Car, Bowser Jr. has access to a variety of weaponry. At first glance, one might think Bowser Jr. is a zoning-heavy character with two projectiles, but the long animations for using these moves limit their potential. Instead, Bowser Jr. primarily relies on fake-outs and approaches with his Clown Kart Dash, a very unpredictable attack. Additionally, Bowser Jr. is equipped with strong, ranged aerials and smash attacks that can really hurt if they connect. Bowser Jr. suffers from the weaknesses commonly plaguing heavyweights, as many of his stronger attacks are sluggish and hard to land. His recovery, while capable of traveling very far, has very exploitable weaknesses that causes him to be edgeguarded pretty easily. Bowser Jr.'s kit is quite different from other characters, but they can always keep your enemies guessing if mastered.

While his diminutive size might suggest otherwise, Bowser Jr.'s clown car makes him a very heavyweight character, outweighing Samus and almost rivaling Ganondorf. His ground speed is pretty poor, being one of the slower characters in the game. His air speed and fall speed is rather average.

Bowser Jr.'s Clown Car provides him with a unique survivability bonus. Any attack that strikes the Clown Car will deal reduced knockback, but hitting Bowser Jr. directly will cause him to take increased knockback instead. As a result, Bowser Jr.'s crouch is the only one in the game with a direct perk, since it makes Bowser Jr. tuck himself entirely into the Clown Car.

Bowser Jr. transforms into the menacing Shadow Mario, who paints a massive X on the screen, then falls back to the stage from the center top. Any enemies that touch the X will take a bit of damage and knockback, and the hits refresh faster the longer the X is out, until it disappears in a strong explosion. Bowser Jr. can still move about and fight while the X is onscreen. This final smash is one of the weaker ones in the game, but makes up for it by being extremely difficult to avoid. The painted X is an overlay on the screen, so its size remains constant even when the camera is zoomed out. In addition, Bowser Jr. can still cause havoc by knocking enemies into the X.