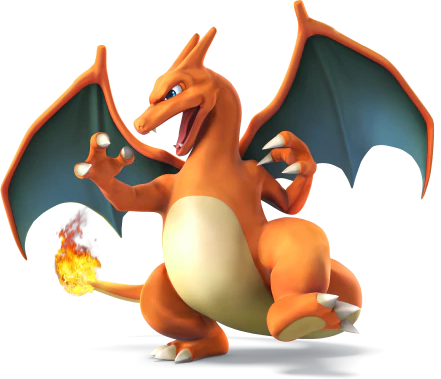 The fan favorite fire starter returns as a solo fighter! Charizard is a typical heavyweight, boasting a lot of weight and a plethora of hard-hitting moves to crush its foes. Among the massive powerhouses, Charizard's specialty is its high dash speed, the fastest of its size, as well as a second midair jump. Charizard's playstyle is a bit similar to that of Bowser, with nice combos off of its throws, armored attacks to counter reckless foes, as well as an excellent projectile in Flamethrower. It also has the brand new Fire Blitz, a quick and deadly charge that harms both Charizard and its opponents. Problems that affect heavyweights in general, such as sluggish movement and attacks, also plagues Charizard, although they are somewhat diminished by its good stats. All in all, Charizard is a capable heavyweight character with good versatility for a fighter its girth.

Charizard belongs in the heaviest weight class of fighters, ranking just behind King Dedede. Like other super heavyweights, it has a rather large frame that makes it easy to hit. For its weight, Charizard is surprisingly quick, with an impressive dash speed comparable to Sheik's. Charizard performs decently in the air. While it has 2 midair jumps, it unfortunately possesses one of the lowest air speeds in the game, making its air movement slow and unwieldy.

With the power of a Charizardite X, Charizard temporarily evolves into Mega Charizard X, gaining immense physical strength and increasing the power of its flames. Mega Charizard X has two attacks depending on the button pressed. Its normal attack becomes a juiced up Dragon Rush, which drills through enemies and can be directed at any angle using the control stick. Its special attack turns into a fierce Fire Blast, a projectile that explodes when it hits an enemy. Both attacks have a slight cooldown preventing them from being spammed. For the duration of the Final Smash, Mega Charizard X has the ability of flight, letting it travel to anywhere on the stage, as well as total invulnerability. For a transformation final smash, Mega Charizard X's attacks aren't overwhelmingly strong, although they deal a lot of damage and will KO as early as most smash attacks. You can use Dragon Rush to drag enemies offstage, while Fire Blast is useful for catching enemies trying to keep their distance.