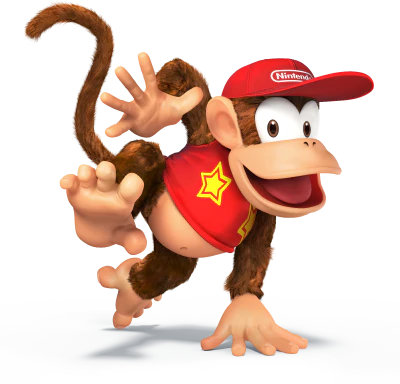 Donkey Kong's spidermonkey sidekick is back and better than ever! Diddy Kong plays like a traditional high agility character but with some extra tricks up his sleeve. Diddy Kong has good mobility and his attacks are fast, letting him poke at opponents and exploit openings. Diddy Kong has a strong grab game and a range of combos, helping him rack up damage with his weaker attacks. Additionally, both of his projectiles are highly useful either at zoning enemies out or setting them up for a powerful attack, while Monkey Flip is one of the best mixup moves in the game. Diddy Kong's biggest weakness would be his poor recovery, which takes a while to build up distance and can be easily intercepted. While he is not as strong compared to the game's initial release, Diddy Kong remains a solid pick with his high mobility and versatile moveset.

Diddy Kong is a middle-lightweight, suiting his agile playstyle. He has above average run speed, capable of rivalling Pikachu's dash. Diddy Kong's lateral air speed is one of the worst, forcing players to be more precise with their jumps to continue a combo. He has really high fall speed which also contributes to his high mobility. Diddy Kong can crawl along the ground with reasonable height decrease. He can also wall jump as well as wall cling, which compensates for his rather predictable recovery specials.

Diddy Kong equips his rocketbarrel pack and two peanut popguns and flies around while firing countless shots. Opponents can be hurt by the peanut shots, but will take more damage if rammed into. Diddy Kong starts to flash at the end of the Final Smash, which finishes with a moderately strong explosion. Rocketbarrel Barrage is one of the weaker Final Smashes in the game. The popgun shots are always fired in the opposite direction where Diddy travels, which not only makes it hard to control for novices, but also limits the amount of pressure you can tack on since the shots tend spread out the further you are from the enemy. The popgun shots are also very weak for how hard they are to land, only a measly 5%. Instead, you may treat it like a poor monkey's Volt Tackle, ramming directly into enemies to deal more damage. The ending explosion is your best bet for KOing enemies; start your pursuit when you can see Diddy flashing.