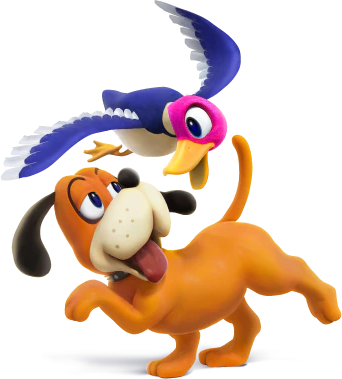 One of the most iconic NES games of all time, Duck Hunt joins the battle with all of its characters: dog, duck and shooter! Duck Hunt is a character with a heavy zoning playstyle, but plays quite differently from other projectile zoners. Their unorthodox special moves lets them set up devious traps and pressure opponents with a combination of projectiles and attacks. They also have an excellent melee moveset for a projectile-dependent character, with fast attacks and good reach, and a solid recovery to round it off. Duck Hunt's shares a major flaw with many other zoning character: it can rack up damage easily but has difficulty KOing. Nevertheless, Duck Hunt is an interesting character with many tricks up their sleeve, so they are a solid choice for any scheming, calculative player.

Despite composing of both a duck and a dog, the duo is quite lightweight, and is pretty nimble as well. The dogs dash speed is middle of the road, while their lateral air speed is above average, with a decent fall speed as well. One of the more subtle strengths of Duck Hunt is the duo's low profile. They have a very short crouch and can crawl, while a surprising number of attacks involve the dog lying low. Lastly, the duo can wall jump, making its recovery slightly better.

A flock of ducks pass through from the foreground. If they miss, nothing happens. However, if they hit at least one character, all affected targets will be trapped in a cinematic shootout between the outlaws of Wild Gunman and the criminals of Hogan's Alley. The shots quickly rack up damage, while sending opponents flying sideways after the attack. This attack is a traditional trapping Final Smash, requiring you to hit with the ducks for anything to actually happen. Like the Blue Falcon, it triggers a cutscene upon successful activation, which pauses the battle for all other players in the match. Compared to other Final Smashes in its category, it has a nice radius for its initial strike, but relatively lackluster power.