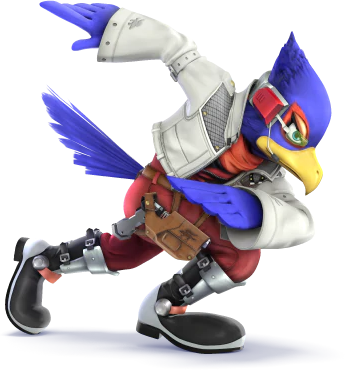 Star Fox's ace space pilot returns with some big changes. As Fox's wingman, Falco shares several moves with his team captain, but plays very different from Fox. While Fox relies on his blindingly high speed and strong offense, Falco's strengths lie in his strong aerial combat capabilities and well-rounded moveset. With a decent projectile, nice combos and good KO moves, Falco is a solid, all-around character. Falco's main weakness is his lack of mobility due to his poor ground and air speeds. While he is not nearly as strong as any of his past iterations, Falco is still very much a strong and capable fighter.

Falco's weight is on the lighter end of the spectrum, around the level of Sheik but heavier than Fox. His dash speed is a far cry from Fox's, getting outrun by the likes of Ike and Samus. His lateral air speed is also below average, but he makes up for it with his impressive jumps, one of the highest, if not the highest jumper in the game. Like Fox, Falco can wall jump.

Falco jumps up and enters his own Landmaster. Like Fox, Falco's Landmaster can harm foes just by running into them, perform barrel rolls, fly, and unleash powerful cannon shots. It is weaker than Fox's Landmaster in many aspects, such as taking longer to turn around and having a weaker cannon shot. However, it is modified for aerial combat, with more powerful jets that give Falco better aerial mobility.

For the most part, you should use Falco's Landmaster as if it were Fox's. Use your massive frame to ram into foes and enemies, then fire your cannon to target distant opponents. Your Landmaster's improved jets also give you a new and effective tactic. Whenever you find a foe standing on top of the Landmaster, you can quickly ascend to the top of the screen, KOing them off the top regardless of damage. Enemies will inevitably end up on your huge body, and if you can rise up before they run off, you can get some easy KOs.