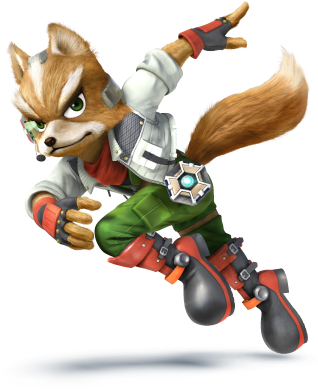 The captain of Team Star Fox is returns for another mission! As the series' original rushdown character, Fox moves fast and drops even faster, giving him amazing mobility. His attacks are all lightning-quick and leave few openings, letting him mount an overwhelming offense without too much risk. Fox's speedy attacks aren't just for damage racking, as his KO moves are hard to react to and pack a punch. Even when he needs to go on the defensive, his speed and trusty blaster lets him play a strong keepaway game. Moreover, his specials give Fox a versatile and long distance recovery. Fox's biggest failing is his high falling speed, which makes him an easy target for juggles and combos. If you like playing aggressive offensive characters, Fox is one of the best choices in the game for you.

As one of the more fleet-footed characters, it's no surprise to learn that Fox is pretty light, around the same weight as Meta Knight, in fact. On the ground, Fox is one of the fastest characters in the game, falling just behind other speedsters like Little Mac and Captain Falcon. His lateral air speed is somewhat average, while his falling speed is famously the highest of the whole cast. His agility also grants him another helpful skill: the ability to wall jump.

Fox jumps off the screen and returns in Star Fox's heavy duty battle tank, the Landmaster. The Landmaster is a powerful vehicle, able to run foes over just by moving around. It is a bit unwieldy, as it is fairly slow and takes a while to reverse direction. It is also capable of limited flight with its thrusters. The Landmaster has two attacks: firing its main cannon with either attack button and a barrel roll performed by tilting the control stick downward. The top of the Landmaster serves as a platform for fighters, but the cannon is dangerous to stand on when firing. Fox is completely safe from attacks while inside the tank, but can still get KO'd if he falls off the stage.

The Landmaster has a relatively long duration for a Final Smash, and that is where its main strength lies. The vehicle is huge and takes up a lot of space, so it can heavily disrupt the fight and force foes to confront it for a good amount of time. On smaller stages, simply moving about and performing barrel rolls is enough to cause serious damage and get a few KOs due to the lack of space to avoid it. The cannon is obviously used to fire at enemies keeping their distance, but it can also quickly blast away any opponents that find themselves on your gun barrel.