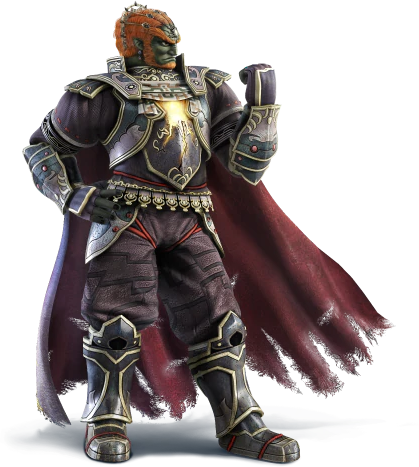 The powerful King of Evil is back, keeping his brutal bare-fisted fighting style inspired by Captain Falcon. More than any other character, Ganondorf is all about power. All of his moves are slow and strong, even his weakest attacks pack quite a punch. Ganondorf can bring a foe from 0% to KO in just a few hits, and his damage output is strong even when compared to other heavyweights. Moreover, his aerial moves have great coverage and functionality, being a big threat both onstage and off. Unfortunately, Ganondorf is limited by quite a few weaknesses. He is one of the slowest characters in the game and his attacks are sluggish, making it easier for more agile characters to outmaneuver him. He also lacks range to combat defensive foes, and his recovery leaves a lot to be desired. Overall, Ganondorf is a character that excels at punishing mistakes. Take advantage of every opening and retaliate with brutal force to truly demonstrate the Triforce's power!

Ganondorf's physique complements his playstyle, being the heaviest humanoid character and one of the heaviest characters in the game overall. He also falls pretty quickly to further emphasize his weight. In terms of speed, Ganondorf almost comes in last at every category, struggling to chase opponents both on the ground and in the air.

Ganondorf transforms into Ganon, a beastly primal form roughly three times as big. Foes nearby get hit and buried into the ground. Next, Ganon does a powerful stomp that stuns enemies, then rushes forward to launch them to their doom. After the attack ends, Ganondorf reappears in his original spot. Beast Ganon is basically a projectile Final Smash, only the projectile takes a while to come out and has higher speed than any other in the game. Your goal is to incapacitate as many enemies as you can with the initial hits so that they cannot escape the charge. On smaller stages, it is very hard to dodge the attack anyways due to Ganon's size, especially if you use it from the ledge facing inward, making this one of the most potent Final Smashes in the game.