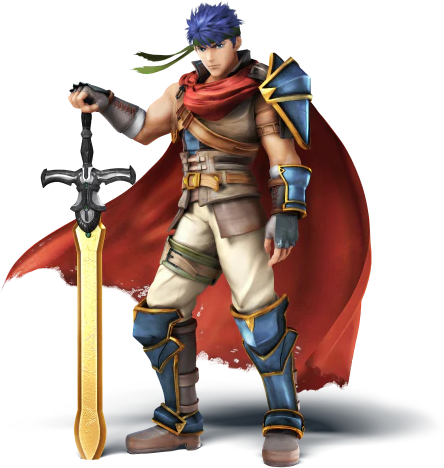 The Radiant Hero is back and beefed up! Ike is a pure swordsman with great power and range owing to his massive Ragnell. This makes Ike a great beginner character, as one can easily rack up damage and KO early just by keeping their distance. Despite this, Ike is still a great pick for higher level matches due to his massive reach. Many of Ike's moves have large swooping arcs, so he is great at mid-range zoning and punishing rolls. Ike's weaknesses are pretty well-known, chief of which being that all of his attacks are pretty sluggish. Ike's horizontal recovery is also quite poor, often forcing Ike to recover from directly below the stage. Ike is often overlooked due to his slowness, but his awesome reach gives him a strong edge over other heavyweight powerhouses.

Ike is one of the heaviest characters in the game, being as heavy as Wario. He has a poor dash, but his air speed is passable. Ike falls decently fast, suiting his high weight.

Ike performs a flaming upward swing. If it hits, he will launch his target to the center top of the stage and deliver a hard-hitting combo of sword strikes. He then finishes with a burning descent, drawing his target down with him. The blast from the landing can also launch nearby enemies. Ike's Great Aether is one of the most popular Final Smashes in the game, one of the reasons being how effective it is. Its initiation strike has great range and coverage due to the length of the Ragnell, letting him potentially catch multiple foes in the move. It's also among the strongest Final Smashes there is, almost always KOing after the damage dealt from the combo. On stages with a high platform in the middle, it can even potentially KO from 0%!