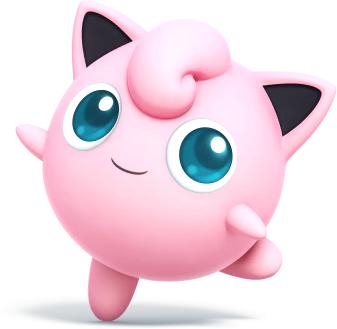 The Balloon Pokemon maintains its perfect attendance streak! Appearance wise, Jigglypuff is probably the least threatening character at first glance. However, this little ball of a Pokemon actually has some surprising power. Jigglypuff's main strength is its aerial mobility. With many jumps and one of the best air speeds in the game, Jigglypuff prefers to stay in the air and wear foes down with its nice aerial attacks. These traits also give Jigglypuff an amazing recovery despite not actually having a traditional recovery Up Special. Finally, Jigglypuff has excellent KO power from both its powerful Back Air and the infamous Rest. Unfortunately, this aerial prowess comes at a cost, as Jigglypuff is the lightest character in the game. It is also much worse on the ground, with poor range on its attacks and terrible dash speed. While there have been many aerial-based characters introduced since Jigglypuff's inception, none can boast a moveset as simple and deadly as Jigglypuff's.

Jigglypuff is the lightest character in the game, so it will get KO'd by attacks earlier than other characters. Luckily, it has the second best air speed in the game, second only to Yoshi, 5 midair jumps, and the lowest fall speed, giving it unrivalled air control and recovery distance. However, Jigglypuff's dash is abysmal, being slower than Ganondorf! Jigglypuff has a unique but detrimental trait: when its shield breaks, Jigglypuff will get sent flying off the screen, unless there is a ceiling directly above it.

Jigglypuff inflates itself to several times its original size, pushing away enemies in the process. Once it reaches its full size, it shouts and knocks every foe close to it far away. The potency of Puff Up depends entirely on the size of the stage it is used on. It is practically unavoidable on Smashville, but struggles to KO on Palutena's Temple. No matter the stage, your main priority before using the Final Smash is getting as many foes as you can on one side, preferable close to the edge. When you use Puff Up, they will naturally be pushed offstage and struggle to recover.