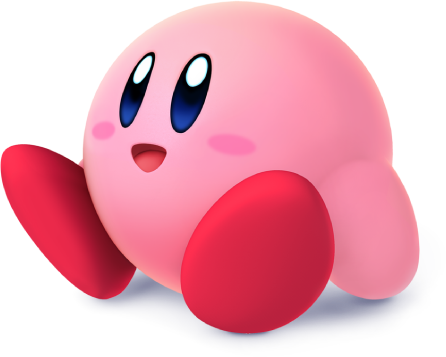 HAL Laboratory's pink puffball returns for another bout in Smash! Kirby's familiar moveset remains mostly unchanged, with only minor stat adjustments. Kirby is certainly a character for novices, a jack of all trades that is easy to pick up. Although being one of the lighter characters, he boasts multiple jumps, great combos, fair reach, strong attacks and unique special attacks. At low level play, Kirby is one of the easiest and most forgiving characters to use, but he is no slouch against advanced players either. Learn to utilize Kirby's tools on the ground and in the air, and you'll be a solid contender in any match.

Kirby is one of the lightest characters in the game, so he can get KO'ed early. Despite having only poor air speed and slow fall speed, he has five mid-air jumps, so Kirby can airdodge a few times and still get back to the stage. On the ground, Kirby has mediocre running speed and short ranged attacks, which makes spacing crucial. However, even though most of Kirby's attacks do little damage compared to others, he is huge in making combos. Also, Kirby is average in roll length, speed, and end lag. Advanced players should take note that Kirby has one of the best crouches in the game, so he can evade some attacks and grabs. Overall, Kirby players should mainly play defensively with some offensive and utilize his ducks and combos for maximum success.

Copy abilities are Kirby's signature skill. Using Inhale, Kirby can copy any character's neutral special move, gaining a hat that signifies the character of the ability he copied from. Trying to use Inhale while he has a copy ability will result in Kirby using the copied ability instead. Unfortunately, Kirby cannot copy custom moves, only the default version of every neutral special move. Kirby can lose his copy ability if he is hit with a powerful attack, is KO'd, or when he taunts. Also, take note that some characters can immediately attack Kirby once he copies the ability. Overall, Kirby should copy characters with projectiles as their neutral attack since Kirby lacks a good projectile.

Kirby swings a huge sword from Return to Dream Land. If he strikes one enemy, he will follow up with a brutal sword combo, slicing at foes from multiple angles, before finishing off with a final cleave to send foes flying. This Final Smash belongs to the category of trapping final smashes, in that it is only activated when the initial hit connects. Ultra Sword's unique quirk is its absurd range. The initial strike has huge horizontal reach, and even sizable vertical reach due to the animation. Kirby can easily strike multiple foes with the first strike on smaller stages. Even during the rest of the Final Smash, opponents not trapped can still be hit by Kirby's slashes, which still have a lot of range, so you can expect to do some collateral damage as well. However, the move only does 34-40% damage, and it usually doesn't KO until around 35-60% depending on the character's weight, which is well below average for a Final Smash. Overall, the range makes up for its weakness.