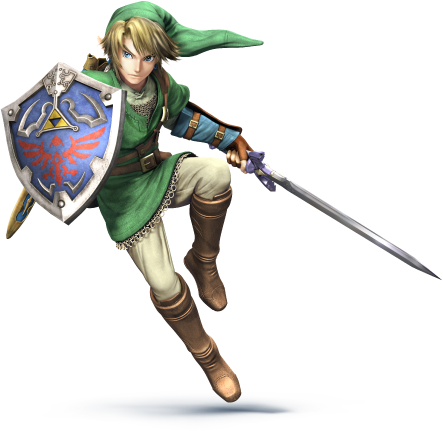 The first swordsman of Smash and definite fan favorite, Link returns to Smash with some neat new moves and some minor tweaks to his kit. Wielding the Master Sword, Link's attacks boast both power and reach, but they're not very fast. In fact, Link's attacks are all a bit sluggish, which hinders his usefulness at close combat. However, Link has plenty of projectiles to make up for his lack of speed, each with unique features that help Link keep foes away or create openings in opponents' defenses. Link is a character that is equipped for any situation, and is a great choice for any patient, defensive player.

With his wide arsenal of weaponry, Link leans toward the heavy side of the spectrum from the weight of all those items he wields. Mobility certainly isn't Link's strong suit. He has pretty poor dash speed and his jumps feel more weighted than average. Link's evasive options are pretty standard, although while his forward roll is slower than average, his back roll is quite quick.

Link is equipped with a Hylian Shield, a tool that is not just an aesthetic feature. The shield will completely neutralize any projectile that hits it, causing the projectile to disappear and preventing Link from taking any damage. However, Link can only use the shield to block attacks when he is holding it in front of him; as in, while standing, crouching or walking without an item equipped, such as his Bombs. This neat little feature isn't going to be useful most of the time, but if you have trouble approaching a projectile camper, it may be better to simply walk toward them then to maneuver around their projectiles.

Upon using the Final Smash, Link will send out his Triforce, which functions as an invisible projectile. If the Triforce hits an enemy player, said player will be trapped between two Triforce pieces as Link tears them apart with a ton of slashes, finishing with a powerful strike that knocks the target sideways. Anyone too close during the Final Smash can also be hit by Link's slashes. It is possible to get trapped in Link's barrage of slices if you aren't targeted, but the pause before the final slash gives you enough time to get out of the way. As mentioned before, this move is a trapping type of Final Smash, which requires you to land the initial hit to trigger the rest of the move. It is one of the better trapping Final Smashes in the game, since the Triforce projectile has amazing horizontal distance, traveling the length of most medium-sized stages. One disadvantage of Triforce Slash is its inability to trap multiple opponents with the attack, but the sheer power and ease of activation more than makes up for that.