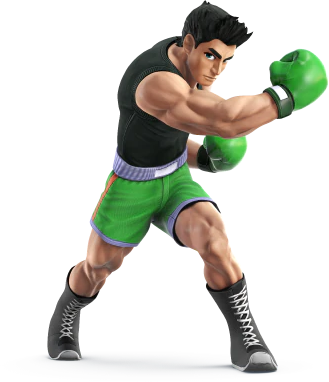 The diminutive boxes from the Bronx joins the Smash circuit! Little Mac is a character of extremes. He has nearly unparalleled speed and power that makes him a massive threat in close range combat, from high damage rapid hits to armored smash attacks that can tear through any enemy move. Additionally, Little Mac has his one-of-a-kind Power Meter mechanic, which lets him unleash a KO Punch, an obscenely strong attack that hits harder than even some Final Smashes. Unfortunately, Little Mac has undoubtedly the worst air game of the cast, with weak aerials and a horrendous recovery, which drastically cripples him on some stages and against certain characters. It's this massive flaw that prevents Little Mac from being an unstoppable powerhouse. If you can play around this weakness, you'll have an absolute beast in your hands that has no trouble racking up damage or getting KOs.

Little Mac is firmly in the lightweight category of battlers, being a tad lighter than Sheik. His ground speed rivals Sonic's, letting him weave around enemy attacks like the agile boxer he is. However, his air speed is below average and he drops really quickly, which further compounds his poor recovery. One saving grace for Little Mac's recovery is his ability to wall jump, which can give him just enough height to grab on to the ledge.

The Power Meter is a mechanic unique to Little Mac. It is a meter that can be seen above Little Mac's portrait, and charges whenever he lands a hit or gets attacked. The meter charges more from getting hit than from dishing out damage. Once it is full, a bell will sound a Little Mac's Neutral Special becomes the fearsome KO Punch, which passes through shields and counters and deals extreme knockback when hit. The KO Punch is available as long as the Power Meter is flashing KO, and the attack will deplete the meter once used. Getting hit while the meter is flashing will also deplete the meter, while getting KO'd resets it no matter how much charge was built up.

Contrary to its name, the KO Punch is not a guaranteed KO. Its knockback, while far higher than any normal move, still cannot reliably KO foes until around 30%. Although powerful, it is rather difficult to land a successful KO Punch, since enemies will try their best to hit you with an attack that causes you to lose your meter. It also has a blind spot point blank which can cause the punch to narrowly miss enemies. Little Mac has many options for KOing other than KO Punch, but you can still use a full meter to intimidate them into playing more cautiously. Since it is both fast and rips through shields, the move can be used as a deadly punish against a failed semi-fast attack or against a shield-happy opponent. The move becomes a lot weaker in the air, so keep in mind never to use it while airborne.

Little Mac grows to a hulking beast of a man, increasing his already excellent speed and strength to absurd levels. Giga Mac gains constant super armor, while Straight Lunge charges at a much faster rate. The Power Meter is also disabled for the duration of the Final Smash. The strategy with using Giga Mac is simple: use your unflinching super armor to spam powerful moves with impunity. The gain in size also increase your range, helping you to pursue enemies trying to evade a lethal beatdown. You are forced to wait a while when transforming back into Little Mac before you regain control. Watch out for any enemies that might use this opportunity to get free hits on you.