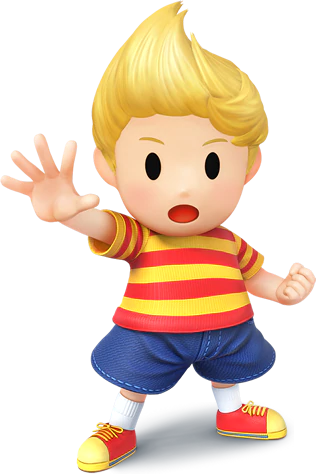 Lucas appears from Nowhere, returning with the same kit he had in Brawl! Lucas is to Ness as Falco is to Fox: they both share some attacks but have vastly different properties on their moves and in their fighting style. While Ness has useful throws and lasting moves, Lucas boasts quick and snappy attacks with good reach coupled with some of the strongest smash attacks in the game, making him a combo and poking oriented character. Lucas also sports an improved recovery that is harder to counter, a nice projectile, a tether grab and a projectile absorbing move that can KO. Lucas's flaws are his somewhat sluggish KO moves as well as his recovery move that can still be countered by projectile absorbers and reflectors. Overall, Lucas is a strong addition to the roster and a unique pick for anyone that likes fast characters.

As a fighter based on Ness, Lucas has the same weight as his counterpart from Onett, being a middleweight that leans toward the light side. His ground speed is faster than Ness but not very impressive compared to the rest of the cast, being about as fast as Ike when running. Lucas also has a better lateral air speed and a falling speed than Ness's, making him generally more mobile. Lucas still shares Ness's long but high double jump, so be careful of having your jump cut short by a footstool.

Lucas summons a column of stars to fall from the sky. During the attack, you can direct the star pillar left or right to track enemies. Lucas's PK Starstorm is very similar to Ness's, so you should use it the same way. The pillar is narrow and not very strong, so you want to keep it trained on enemies to hit them multiple times. Just like with Ness, an effective strategy is to slowly sweep up from the center to the sides, giving opponents less space to avoid the storm until they're inevitably hit.