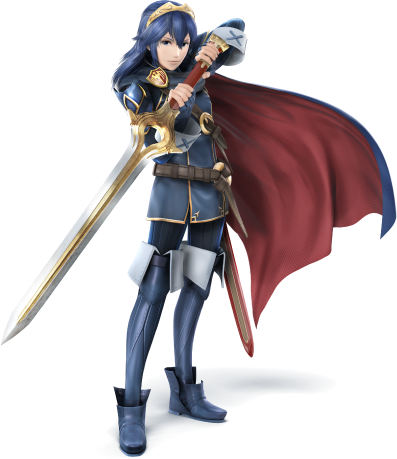 Lucina joins the fray as the second character from Fire Emblem Awakening. Being a distant descendant of Marth and wielding the Falchion, Lucina's moveset is nearly identical to the hero king, with one major difference: her attacks do not have a tipper and do the same damage and knockback throughout the sword. As such, Lucina plays very similar to Marth, but is slightly more forgiving to novices. Much of the strategy and skills needed to play Marth can be applied to Lucina as well. Unfortunately, it cannot be denied that for a player skilled enough to land consistent tippers, Marth is usually a much stronger option, so Lucina is often overshadowed by her distant ancestor. Regardless, Lucina is still a decent character with a moveset borrowed from a solid veteran, so she is definitely a character worth dedicating yourself to learning.

As a moveset clone of Marth, Lucina shares many traits with him, with average stats all-around with great ground speed and range. She is a middleweight, bordering on being light. Lucina is notable for having the highest walking speed, shared with Marth, as well as above average dashing speed. Lucina's jumps are moderately high, and she is slightly floaty. Lucina's rolls cover good distance, but they're not particularly fast. While Lucina lacks tipper moves, all of her sword attacks are stronger than Marth's non-tippered counterparts, but noticeably weaker than his tipper strikes. It is still a good idea to use moves at tipper range to be safer from punishes. Note that Lucina is slightly shorter than Marth, so that she has less vertical range but also a smaller hurtbox.

Lucina charges forward extremely quickly, striking the first foe in her path with massive damage and knockback. This is one of the strongest Final Smashes in the game, capable of causing a one-hit KO in almost any situation. However, it is also the riskiest, as Lucina will keep charging until she reaches the edge. Use this on a walkoff stage or in the air, and a miss will cause Lucina to charge to her doom, although you can cancel the move early by pressing the button again. This Final Smash is rather difficult to utilize, since there is a fairly long delay after Lucina initiates the move until she actually rushes forward, during which opponents could respond. Try to use this when enemies are grouped together to maximize your chances of hitting one. Remember to cancel it if it looks like you've missed.