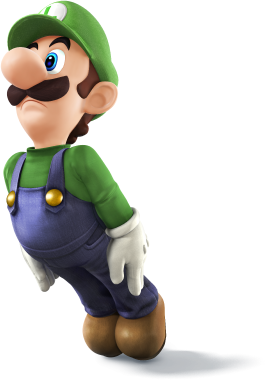 The younger of the Mario brothers returns in his first ever appearance as a starter character in Smash. Luigi is similar to his sibling Mario, although he does have many unique moves of his own. Luigi excels at close quarters fighting and comboing, with an array of fast attacks that chain into each other easily. He also possesses several useful KO options. While not as strong has his brother, he still has enough strength to get by, especially with his deadly Super Jump Punch. He also has a very well long-distance albeit somewhat predictable recovery. Luigi's main flaw is his average mobility, with below average speed compounded by awkward movement due to his low traction. Like his brother, Luigi also suffers from range issues, having to get close to use his melee attacks and multitude of combo options. Luigi is not as beginner-friendly as Mario, but if you love stringing combos together, the green-clad Mario brother is certainly a solid pick.

Like Mario, Luigi is a middleweight. However, Luigi's movement speed is generally slightly lower than Mario's, although it's still in the middle of the pack compared to the rest of the cast. His dash speed is slightly below average, while his lateral air speed is rather poor. Just like in his home series, Luigi jumps higher than Mario, and has poor traction. While Luigi cannot wall jump like Mario, he can crawl, lowering his profile enough to dodge some projectiles.

Luigi equips Professor E. Gadd's ghostbusting vacuum cleaner and sucks up fighters around him. Any enemies sucked in will be trapped and be dealt constant damage before Luigi launches them diagonally upward. Luigi can sometimes shoot out items as well. This is a unique trapping Final Smash which requires Luigi to suck in at least one foe to function. It has a pretty long initial strike, during which Luigi will point the hose in all directions and he will keep sucking until the full animation plays out, increasing the chances of trapping multiple foes. The tradeoff is that this Final Smash is not very strong, usually KOing at around 30% depending on Luigi's position. Regardless, it is a pretty good Final Smash due to its ease of use.