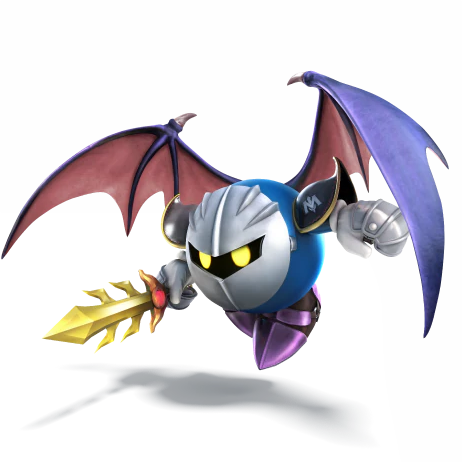 The masked swordsman returns in Smash! Meta Knight, although lightweight, has six jumps, great air attacks, and fast speed. However, during his transition, Meta Knight has been greatly weakened because he is too powerful in Brawl. Nevertheless, he can still be a great sword warrior if properly learned.

Meta Knight is lightweight and gets launched farther than average, but he has five mid-air jumps. He has decent aerial agility and air attacks, making him useful at edge-guarding. Meta Knight is also fast and can get into moves quick. He has average roll length but short roll time and end lag. Also, take note that his attacks and special moves are weakened and have more starting and ending lag since he is too powerful in Brawl.

Meta Knight uses his cape to attempt to cover a foe. He also either says, "Know my power!" or says, "Behold!" If it works, Meta Knight does a huge slash. The one covered takes 40% damage, while everyone else gets 10% damage. Despite not covering a lot of range, it can KO between 25% and 45% damage depending on the opponent's weight.