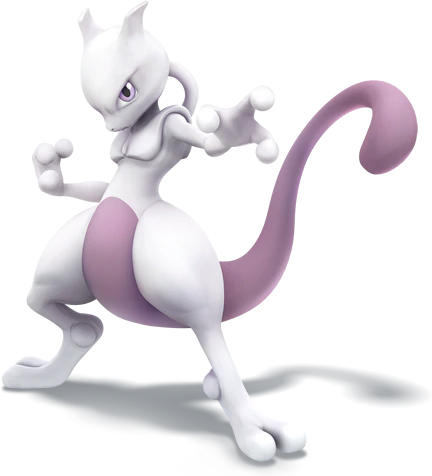 Mewtwo strikes back by popular demand after an absence in Brawl! Mewtwo shares several similarities with Rosalina, being large but very lightweight, and having long-reaching attacks. Mewtwo's main form of attack is with its long tail, which gives it excellent physical range to poke enemies or to keep foes at bay. Mewtwo also has a great projectile and several KO options, including powerful smashes and reliable throws. Additionally, Mewtwo has some tricky moves up its sleeve, from a projectile reflector to a sharp stare that stuns enemies. Unfortunately, Mewtwo's lightness gives it serious problems with survival, compounded by its size which makes it harder to evade opposing attacks. Some of Mewtwo's better ranged attacks are also sluggish, so mobile characters can give it trouble. All in all, Mewtwo is a defensive glass cannon, using its range to damage and KO while keeping itself from harm.

Mewtwo is ridiculously lightweight. In fact, it is even lighter than Mr. Game & Watch, placing it only above Jigglypuff on weight rankings. Its ground speed is pretty average, dashing roughly as fast as Donkey Kong, while its air speed is excellent, coming just behind Jigglypuff. Mewtwo's fall speed is pretty average as well, but its lengthy jump animation make it feel floaty. Its dodges all involve teleporting in and out, which makes it harder for enemies to tell where you're dodging. Mewtwo is able to wall jump.

Mewtwo transforms into Mega Mewtwo Y, greatly amplifying its psychic powers. It launches a sphere of psychic energy that travels across the screen. Any enemies that as much as grazes the sphere gets stunned as their minds are overwhelmed by psychic force, sending them flying. Psystrike is a simple, albeit flashy projectile Final Smash, similar in vein to Zelda's Light Arrow. Your goal is to have as many players lined up in the path of your psychic ball as you can to maximize its effect. The ball travels somewhat slowly but has a pretty big hitbox, so you need a little anticipation to catch more mobile players with it. Psystrike is moderately powerful for a Final Smash, usually KOing from around 50%.