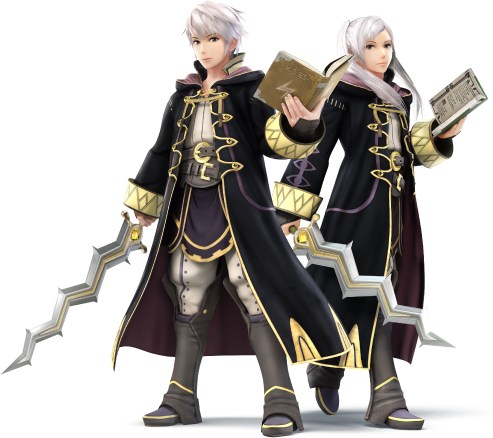 The greatest tactician of Ylisse joins the battle! Robin is a character that is heavily reliant on projectile zoning, with multiple projectile attacks that have varying properties. However, unlike other defensive projectile users, Robin is very lacking in mobility, being one of the slowest characters in the game, and most of his attacks have limited uses, causing them to greatly weaken or outright be lost temporarily if he uses them too carelessly. Despite these limitations, Robin's skillset is still very effective at keeping foes away, from quick shots to lingering flames to powerful beams that travel across the screen. His Levin Sword also makes him a threat even at close range, granting him increased reach and high power. Fitting for his job title, using Robin requires more tactics and strategy than reflexive skill, using his range of projectiles to harass and control his opponent for a final electrifying strike.

Robin is a typical humanoid middleweight, weighing slightly below Pit. He has the absolute worst dash speed in the game and poor walk speed as well, giving him poor mobility on the ground. His air speed is passable while his fall speed is average, giving him less of a disadvantage fighting in the air.

Tomes and the Levin Sword[edit]

Robin's attacks carry over the durability system from the Fire Emblem series. For most of his normal moves, Robin can use both the Bronze Sword and the Levin Sword. The Bronze Sword never breaks and is used whenever the control stick is tilted for an attack instead of tapped, or for attacks that don't involve a direction at all, but has short range and lower knockback. The Levin Sword is brought out whenever the control stick is tapped in a direction for a move, such as when using smash attacks. The Levin Sword has better range and significantly greater knockback, but breaks after 8 attacks regardless of whether they hit. The Levin Sword will stay out until it breaks or until a Bronze Sword move is used. The Levin Sword recharges very quickly, but the short period before it does so could give your enemy a chance to mount a comeback, so it's advisable to save it for KOs.

Meanwhile, Robin's tomes used for his special moves can also break, after which the spells are rendered completely unusable until it recharges. The Thunder tome has a total of 20 charges which is used up differently depending on how much the Thunder move is charged. The Fire tome has 6 charges; each use of Arcfire or the fire combo ender of his neutral attack takes away one charge. Both the Thunder and Fire tomes have identical recharge times, not too long but lengthy enough to matter. The Wind tome has 8 charges and one is used whenever Elwind or the wind combo of neutral attack is used. It recharges extremely quickly, at the same rate as the Levin Sword. The Dark tome only has 4 charges and the longest charge time out of all the tomes.

Whenever a tome or the Levin Sword is used up, Robin will toss it away. Any player including Robin himself can catch it before it lands and use the discarded item as a strong physical projectile.

Chrom appears beside Robin and rushes forward. If he hits an enemy, he will launch them into the top center of the stage, where Chrom will slash at the foe relentlessly while Robin attacks with bolts of Thunder. After the brutal combo of magic and blade, Robin launches the foe down with a powerful Bolganone, sending them ricocheting off the floor. Robin's Final Smash is best described as a mix between Triforce Slash and Great Aether. Its initiation strike is technically a projectile, with Chrom rushing roughly half the length of Battlefield to start the attack. The move also always moves both Robin and the target to the top of the screen like Ike's Great Aether, albeit with reduced strength. It is stronger on stages with elevated middle platforms such as Boxing Ring, as targets will bounce off the higher platform and get KOed earlier. If Robin pulls off the Final Smash successfully, his Levin Sword and magic tomes will instantly recharge.