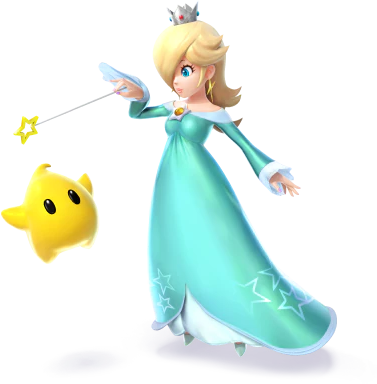 The lady of the stars have became a recurring character in the Mario series since her first appearance in Galaxy, and Rosalina makes her debut as a fighter in the fourth iteration of Smash Bros. Rosalina's most obvious feature is her Luma, which she can command to assist her in attacks or strike from a distance. With intelligent control of the Luma, Rosalina can set up deadly combos and create devious traps to keep foes on their toes. However, Rosalina herself is no slouch when it comes to fighting alone. With plenty of quick attacks, all of which possess awesome reach and disjoints, great evasive options as well as one of the best recoveries in the game, Rosalina can hold her own just fine without the help of Luma. Rosalina and Luma is one of the best characters to choose if you like calculated, strategic play. Once you get past the moderate learning curve, Rosalina and Luma is one of the most flexible and creative characters in the game.

Rosalina is one of the tallest characters in the game. Unfortunately, she is also one of the lightest, near the extreme end of the lightweight spectrum, which hampers her survivability. Rosalina's speed on the ground is pretty average. Her aerial performance is standard for a lightweight, having floaty jumps and good lateral air speed. Rosalina has some really good dodges. They are both moderately fast and turns Rosalina invisible briefly, so using multiple dodges is good for confusing your foes. Rosalina is one of the few characters that can crawl, even though her crawling animation is quite odd. Due to Rosalina's height, you won't be evading much by crawling, so this feature is pretty pointless on Rosalina.

Rosalina is always accompanied by Luma, who helps her out in battle. Good use of the Luma is crucial in using Rosalina optimally, so it's worth understanding how Luma works.

Whenever Rosalina attacks, Luma will attack with a move of its own depending on the attack used, regardless of the Luma's position. However, the Luma won't attack if you use a grab or a throw, as well as when wielding held items such as the Beam Sword. When next to Rosalina, her attacks will usually combo into the Luma's to extra damage and knockback. Rosalina is even reliant on Luma for some of her moves, such as Star Bits. The Luma can also provide added protection, blocking enemy attacks including projectiles. Luma can still attack when Rosalina is stunned, asleep or grabbed, so its great for interrupting combos.

Rosalina can separate herself from the Luma to strike foes remotely and control stage positions. Her primary way of separating from the Luma is with Luma Shot and its variants. The Luma might also be separated after being hit. Once away from Rosalina, Luma will still follow Rosalina's orders regardless of range. You can make Luma change the direction it is facing using any sideways attack in the direction you want, like Side Smash or Star Bits. When not using an attack, the Luma will slowly hop toward Rosalina. Incidentally, the Luma will automatically separate from Rosalina when she is healed. Keep this in mind if you're using Auto-Healer or other similar types of equipment.

Although Luma can keep Rosalina safe, he is pretty poor on the defensive front, being unable to shield or dodge enemy attacks. Luma will still take damage and knockback in most situations when hit by enemies. The Luma has a hidden health bar, and he will pop out of existence upon having his health depleted. Luma can also, and will often, die from falling off the stage. This is usually the result of being launched past the edge by an enemy attack. Whenever a Luma is KO'd, it takes around 13 second for Rosalina to summon a new one.