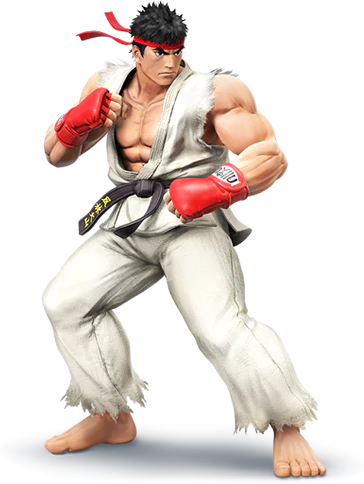 The star of the series that spawned the fighting game genre, Ryu of Street Fighter fame joins the battle! Ryu is one of the most nuanced and technical characters in the game, owing to his unique move inputs. Ryu's fighting style in this game is made to emulate the gameplay of Street Fighter, giving Ryu access to additional moves and the ability to alter the properties of his specials. Even without delving into his deeper mechanics, Ryu's strong normals are solid enough for any novice to pick up, ranging from excellent combo attacks to powerful KO moves. He also has a range of interesting special moves, such as a solid projectile, a strong uppercut finisher and the unique Focus Attack. The biggest hurdle to overcome when using Ryu is the technical barrier, as the mechanics exclusive to Ryu make him a difficult character to both learn and master. In terms of actual weaknesses, Ryu's recovery is also rigid, albeit having a long distance is executed properly. Ryu is not a character you can learn overnight, but it is very rewarding to master this advanced fighter.

Ryu is on the heavier side of human characters, weighing more than Shulk but less than Link. His dash speed is pretty moderate, tied with Mario. His air speed is above average, while his fall speed is a bit on the fast side.

Ryu has two variations for every grounded normal attack, depending on whether the button is lightly tapped or held. Tapped attacks are usually weaker than held attacks. Ryu can also execute his special moves using both the standard Smash method or the traditional stick movement of the Street Fighter games. Using the advanced command input for specials makes them stronger or gives them more distance, as well as letting Ryu use his specials using the normal attack button to better string moves together. The specific commands for each special is given below, with the controls assuming the player is facing right.

Ryu is the only character to have two final smashes in the game. When there are no enemies in close proximity, Ryu will use the Shinku Hadouken, a powerful projectile that can tear through multiple enemies. However, it is weaker compared to other projectile Final Smashes like the Mario Finale or Zero Laser. Instead, you should try to land the Final Smash up close, upon which the attack becomes the Shin Shoryuken, an immensely strong super combo that launches foes skyward. It is one of the stronger Final Smashes in the game, capable of KOing at around 20%.