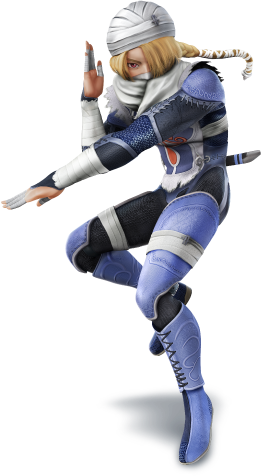 The last member of the Sheikah tribe is back in top form! Sheik is one of the best, if not the best offensive characters in the game. Her attacks are all extremely quick and never leave her vulnerable for long, while her mobility is nearly unparalleled. Sheik has one of the best range of combos in the game, letting her rack on damage with ease while carrying foes across the stage. She also has a powerful answer against long-range fighters with Needle Storm, letting her remain a threat even from a distance. She is also great at offstage fighting, and her recovery is very hard to intercept. Sheik's weaknesses are her poor damage output and severe trouble with KOing. Sheik has the tools to help you win any fight; exploit them to the fullest and you'll be a nearly unstoppable force.

Sheik is a lightweight humanoid character, sharing her weight with Zelda. Her dash speed and lateral air speed are very good, both being within the top 15 of the standard roster, letting her chase down enemies or make an escape if needed. She also has high fall speed, giving her the feel of a fast faller which further assists her in her rushdown. Sheik can also wall jump as well as cling to walls for a short duration. Lastly, Sheik is able to crawl, significantly reducing her height while letting her advance.

Sheik pulls out a bow of light and fires a large arrow across the screen. All enemies that are struck will take heavy knockback, which decreases with each subsequent foe targeted. The projectile can pierce through shields. Compared to Zelda's Light Arrow, which launches enemies upward, Sheik's Light Arrow sends enemies flying sideways. It also has lower knockback than Zelda's but higher damage. Sheik's Final Smash is used in much of the same way as Zelda's: line your enemies up and fire. While the arrow is not as strong, the knockback trajectory of Sheik's version could help it KO better, since it always launches enemies toward the sides. That means that even though enemies receive less knockback if the arrow has already passed through multiple targets, they will be equally likely to get KO'd due to being closer to the side blastzones.