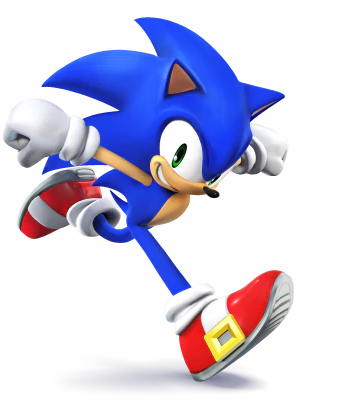 The blue blur makes his second third-party appearance in Super Smash Bros.! When it comes to speed, no other character compare with Sonic's dashes. However, unlike other speed demons like Fox or Sheik, Sonic doesn't have many low-duration moves or long combo chains for a continuous rushdown playstyle. Instead, Sonic's moveset supports a relentless hit-and-run strategy, using Spin Dashes and the multitude of options out of them to confuse and overwhelm foes. Sonic also has a great recovery and a bunch of excellent edgeguarding moves, making him a dangerous opponent offstage as well. As with most agile characters, Sonic's main weakness is difficulty KOing, as most of Sonic's KO moves are slightly weaker than normal. While easy enough for beginners to pick up, Sonic can be one of the most frustrating opponents once one masters his tricky moveset.

Sonic is, without a doubt, the character with the fastest dash speed in the game, and his air speed is really above average as well. Despite his high speed, Sonic is a middleweight in the range of Pit and Pac-Man. His fall speed is intermediate and his rolls are reasonably fast. Fitting for such an agile character, Sonic can wall jump to boost his recovery.

Sonic uses the power of the Chaos Emeralds to temporarily transform into the golden Super Sonic, gaining total invulnerability and constant flight for the duration of the Final Smash. While in this state, Sonic's main way of attacking foes is by ramming into them, dealing more knockback the faster his speed is. The main drawback of this move is the difficulty of controlling Super Sonic. Super Sonic only undergoes acceleration when moving horizontally, and he has major inertia when switching sides at high speeds, which makes him hard to use if you're not adept with the Final Smash. A good way to use it is to make wide sweeps across the stage, only making vertical adjustments while you're rushing forward so you can maintain a high speed and strike foes with max power.