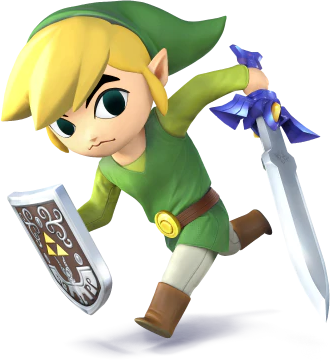 The Hero of Winds makes his second appearance in Smash Bros.! As his name implies, Toon Link shares a lot of his moves with Link, but generally trades range and power for speed. Toon Link plays very similarly to his older counterpart, relying on his projectiles to keep enemies at bay. However, instead of fighting like a stalwart warrior, Toon Link's added mobility lets him play more like a mischievous rouge, slipping around his enemies and pelting them with projectiles from all directions. His sword attacks are fast and ranged as well, making him a capable close-range fighter especially in the air. Toon Link's weakness is his difficulty KOing enemies, since his KO moves are either not very strong or too sluggish to connect reliably. If you're looking for character that can zone foes out as well as run circles around them, Toon Link may be the character for you.

Toon Link shares his weight with Diddy Kong, firmly in the category of a middleweight, but he feels much lighter than Link due to his higher speed and some of the most floaty jumps in the game. He is quite quick on the ground, but has really poor air speed. Toon Link is also the only sword-wielding character that can wall jump.

Like Link, Toon Link's Hero Shield will nullify and destroy projectiles in front of Toon Link when he is standing, walking or crouching, provided he is not holding an item. This feature gives Toon Link an edge over other projectile users, as he can slowly advance at a zoning enemy while being protected by the shield.

Toon Link fires his Triforce of Courage out, which travels in a straight line across the screen. If the invisible projectile touches an enemy player, they will be trapped in the Triforce as Toon Link shoots forward and delivers a ruthless combination of sword strikes. Nearby opponents may also be caught by Toon Link's slashes if they're not careful. At the end of the Final Smash, Toon Link finishes with a powerful thrust that sends the trapped foe flying. Toon Link's Triforce Slash is similar to Link's, but with lower range and knockback, but it's used in pretty much the same way. You need to line yourself up with any enemy and activate the attack so that you trap them with the initial hit, then just enjoy the spectacle that ensues.