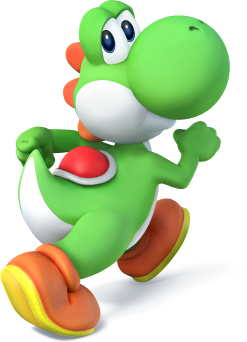 Mario's faithful ride from Yoshi's Island is back, now with a more upright posture. Yoshi is a balanced well-rounded character that leans slightly toward the strong, heavyweight side of the spectrum. He has a varied melee moveset that boasts good speed and range, a fairly wide choice of KO moves when he needs to finish foes off, and an excellent projectile for playing keepaway and harassing his opponents. While none of his stats are very stellar, his solid attacks and all-around strengths make him a confident contender against foes with more specialized strengths. The only significant weakness Yoshi really has is the lack of a good recovery move, which can still be overcome partially with his great double jump. Yoshi's odd movement may make him one of the harder characters to pick up, but he is definitely a solid character to stick with.

Yoshi belongs in the humanoid middle-heavyweight weight class, weighing about the same as Link and Mega Man. He is pretty quick on his feet, having a dash speed that can rival Pikachu's. However, Yoshi really shines in the air, boasting the highest lateral air speed in the game, and is one of the floatiest characters on the roster. Yoshi is capable of crawling on the ground.

One notable trait about Yoshi is his midair flutter jump. Yoshi's double jump goes much higher than most characters to compensate for his lack of a traditional recovery move, and he gets heavy armor during the jump to boot. This means that he will not be knocked out of the jump by all but the strongest attacks, giving him added protection. Watch out for footstools though, as they can cut your jump short!

Another neat feature of Yoshi is his egg shield. Yoshi's shield doesn't decrease in size, but it still decays over time as indicated by its color, letting Yoshi withstand shield pressure better than other characters. A big change over his past iterations is the ability to jump out of shield like other characters, giving Yoshi the ability to respond to shield pressure as well. Also notable is Yoshi's rolls, which is one of the slower roll dodges in the game.

Yoshi gains the power of a flashing shell and temporarily transforms into the Super Dragon! Sporting wings, Yoshi can fly freely around the stage, harming any opponents that he collides with. He will also breath a constant stream of fire, but can also launch powerful fireballs by pressing either attack button. The fireballs are strongest at close range, and they can pass through multiple enemies. Super Dragon's main strength lies in its long transformation time. While Yoshi's newly-gained abilities aren't extremely powerful, he can make use of the move's extended duration to wreak havoc in the match. Use your fire breath to deal damage, then follow up with a fireball to get KOs. Both ramming into foes and using your fireballs are also excellent edgeguard tactics, especially since you are safe from falling due to your constant flight.