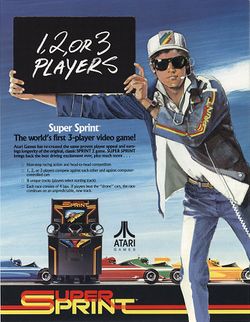 Super Sprint is a racing arcade game which was released by Atari Games in 1986; it runs upon their System 2 hardware, and (as the naming suggests), it is the fifth title for their Sprint series. Up to three players must use a steering wheel and gas pedal, to take control of a car (blue for 1P, red for 2P, and yellow for 3P), with the CPU filling in for missing players (along with the fourth, green car) - and unlike in the previous Sprint titles, the players will have to choose one of eight different tracks at the start of the game, and complete a preset number of laps on it. Powerups will also occasionally appear on the track during the race, and the players may collect them for bonuses; they may also tune up their cars between races, but as soon as they fail to finish a race first their game will be over and the remaining players shall continue without them. Tengen produced several home conversions of the game for the Amstrad CPC, Atari ST, Commodore 64, Nintendo Entertainment System and Sinclair ZX Spectrum - but they are all (with the possible exception of the ST) inferior to the original, due to the fact that they were released on 8-bit systems (the AS2 is a good example of a 16-bit board released before 1987).