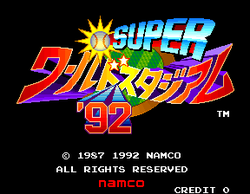 Super World Stadium '92 (スーパーワールドスタジアム'92, literally Sūpā Wārudo Sutajiamu '92) is a baseball arcade game that was released by Namco in 1992 only in Japan. It runs on Namco System 2 hardware and is the fifth title in the company's World Stadium series; much like its predecessors, it used a Yamaha YM-2151 FM sound chip (for all its songs this time as opposed to just the secondary ones), but it used a C140 custom sound chip for its sound effects and speech (as opposed to a PSG and DAC). It also features twelve new-for-1992 teams - which makes it the first title in the series that did not feature at least one of the twelve who had appeared in the original World Stadium from 1988.

As mentioned above, the players must select one of twelve new-for-1992 teams (the Seibu Lions, the Kintetsu Buffaloes, the Hiroshima Tōyō Carp, the Chūnichi Dragons, the Orix Blue Wave, the Nippon-Ham Fighters, the Yakult Swallows, the Yomiuri Giants whom the NS1-era Giants were a loose spoof of, the Fukuoka Daiei Hawks, the Chiba Lotte Marines, the Yokohama Taiyo Whales and the Hanshin Tigers); they must then select one of the four stadiums for the match to take place in (Dome, Kōshien from the three NS1-era titles, Seaside, and Manhattan) before picking one of their chosen team's five pitchers (the rear views of whom will no longer be displayed on the screen as you push your joysticks up and down to highlight them - and their names are now displayed in Kanji as opposed to Hiragana). Both of your chosen teams' full 9-player lineups will then be displayed (again, in Kanji) on the screen, before all eighteen players run out to take their positions on the field of the chosen stadium yet again.