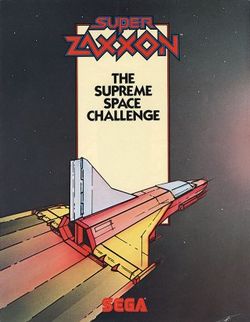 After the release of Zaxxon, Sega realized it had a hit on its hands. The unique nature of the game featuring its three-quarter perspective was one of the first (if not the first) games to add depth and some feeling of perspective to a space game. Sega was quick to follow up on this success with Super Zaxxon. Super Zaxxon built on the Zaxxon model by creating a more challenging game. Although Super Zaxxon didn't do as well as its predecessor, it still created a respectable niche as far as arcade games went. It was not ported to nearly as many systems as Zaxxon was, making it only to the Commodore 64, MS-DOS, and the Atari 8-bit line of computers. 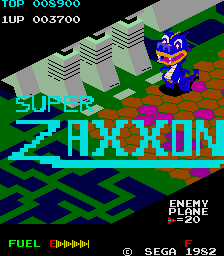 With Super Zaxxon, Zaxxon has been given a new coat of paint, but that's about it. The graphics are much more colorful, and enemy turrets and fuel tanks have been redesigned. But everything is in nearly the same place as before on both the first and second asteroids, so any patterns that you may have used on Zaxxon will work on Super Zaxxon.

A major difference between the two games is that the player's ship moves faster in Super Zaxxon than in Zaxxon, requiring faster reaction time. This aspect of the game results in a quick end to the first few games for beginners as well as former Zaxxon players.

At the end of the first asteroid comes the only original addition to Super Zaxxon. Rather than flying up and over a wall to face enemy fighters in space, the player must enter a tunnel. While in the tunnel, upward mobility is restricted to the lowest two levels, and placed in your path are the old fighters from Zaxxon and new mines that will try to move in front of you.

With the great increase in speed and the restricted mobility of the player, this point in the game is the most unfair to the player. It is very difficult, though not impossible, to survive. If all the fighters and mines within the tunnel are destroyed, a 2,000 point bonus is awarded.

At the end of the tunnel, the player enters space and must fly up over a wall to attack the second asteroid. As mentioned earlier, this asteroid has a very similar layout to the second asteroid of Zaxxon. And at the end of the 2nd asteroid, the 1,000 point Zaxxon robot has been replaced by a fire-breating Dragon (also, supposedly, a robot). If you destroy the Dragon by shooting it in the mouth six times before it tries to fry you, you'll get 2,000 points. Otherwise, all that you'll get is 500 points.

After the 2nd asteroid in Zaxxon, the player returns to the beginning of the first asteroid to try it all again with a slightly faster fuel consumption and restricted openings in the walls. But in Super Zaxxon, you have to face the Dragon a total of three times. This could add up to as much as 6,000 points and may see like a waste of time. It is, because you need enough fuel to survive three attacks. At later stages, facing the Dragon three times is just a cheap way of killing off the player's ship without giving him or her the chance to get any more fuel.

Super Zaxxon is a good looking game, but the unfair aspects of the game play severely limited it chances of becoming as big a success as Zaxxon was.