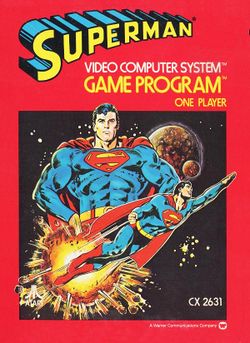 Superman is an Atari 2600 game designed by John Dunn and published by Atari in 1978.

The player(s) takes control of the DC Comics character Superman, who must repair the bridge destroyed by Lex Luthor, capture Luthor and his criminals underlings, enter a phonebooth to turn back into Clark Kent, then return to the Daily Planet in the shortest amount of time. To slow Superman's progress, Kryptonite has been released by Luthor. If hit by Kryptonite, Superman loses his abilities to capture criminals and fly. To regain them, he must find and kiss Lois Lane.

Only three of Superman's powers are used in this game: strength, X-ray vision, and flight.

The game can be played with two players. The player using the left joystick controller will have priority over the left and right movement of Superman, while the player using the right controller will have priority over up and down movement of Superman. Superman is one of the earliest console games to feature a Pause option, which could be activated by pressing the select switch on the Atari 2600.