Your chief editor wants you to find out about the stolen items. Jimmy has nothing helpful to say, but Lois suggests that you start by checking out the McKeesport Art Museum. 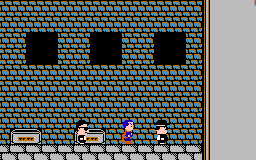 The area outside of the Daily Planet will be occupied by thugs this time. Hop in the phone booth to transform into Superman. Then begin running to the right to reach the Art Museum. You'll have to pass through blocks of gun-toting gangsters and zombies, and you'll reach the museum one block after you pass through a friendly neighborhood. You'll find FBI agents waiting for you inside. It seems that Lex Luthor was attempting to make a monster (actually, a clone of Superman according to the Japanese version of the game), and it broke down and became three separate fire beasts. These fire beasts have attacked three different locations throughout Metropolis.

You are given absolutely no clues as to where to find these beasts, meaning without any guide to direct you, you must wander throughout Metropolis in search of their locations. If you wish to know exactly where to look, read below. 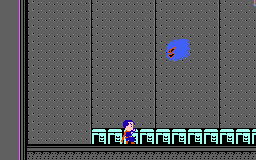 The first beast is located in a place that you've likely not visited before. Head to Staunton, either by taking the subway or by flying. Staunton only has one feature, University Plaza. Fight past a few zombies, step inside, and prepare to fight three more zombies inside. Drop down to the floor below, beat up the three thugs, and drop down another floor to fight three gunmen. You won't receive anything for beating up these enemies, not even power upgrades. However, when you reach the bottom floor, you will encounter what appears to be a large blue fire beast. Don't bother using Super Breath-1, it won't work. Simply punch the beast like you would any boss until it is defeated. You will earn a Super Breath-2 upgrade. Collect it and climb your way back up to the first floor and exit the building. 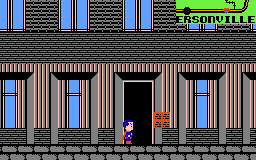 The next location your should search in is Andersonville. You are looking for Palace Disco to the left of the subway which leads to Centennial Park (over the "I" on the map). There won't be a lot of hassle this time, you will encounter the fire beast as soon as you enter the building. Beating this one will earn you a Heat Vision upgrade. 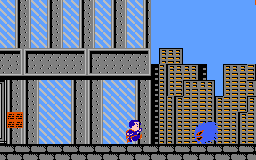 You will eventually need to make your way to the police station. It just so happens that the third fire beast is nearby. Take the subway (or fly) to Teaboro. Run to the right, through China Town, and keep going, past Center Books. The last fire beast will occupy the rightmost outdoor area of Teaboro, in front of the Civic Center. Beat it up, and you will earn an X-Ray Vision upgrade. If you have managed to collect every upgrade to this point, all of your super powers should be at their maximum length of ten tiles.

With the last fire beast destroyed, head back to the police station near the subway entrance. Inside, you will meet back up with the FBI agents, who will inform you that Lex Luthor is reportedly hiding under Central Station. Central Station happens to be where "CBD" is located on the map. 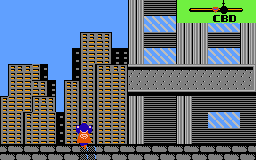 Head to CBD, again either by flying, or walking and taking the subway. It turns out that a full Super Flight meter can get you all the way to CBD from the subway entrance to Teaboro in Senneville, saving you a tremendous amount of time, and depositing you right in front of Central Station. The area won't appear to contain what you're looking for, unless you're familiar with how Superman's Super Spin power works, a power you've not needed to use until now. To the left of the Civic Center, you will find a narrow column on the ground that looks different than the rest of the pavement. Activate your Super Spin power, stand over this column, and use the power to drill your way underground.

Below the ground, you will find gunmen and two ladders that lead deeper down. The left one will ultimately lead to a dead-end, and is best ignored. Instead, investigate the right ladder. While you're down there, don't forget that ladders can serve as shields against bullets. Find the next ladder down to the right, and you'll find the following ladder almost immediately. In the next level down, the left leads to a dead-end, so head to the right, jump over the water, and climb the next ladder back up. This leads to a small chamber with two gunmen and another ladder up, which leads to another small chamber and a single gunman. 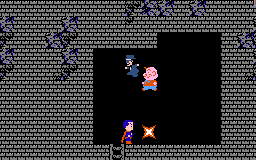 Climb the ladder in the second small chamber, and you will come face to face with Lex Luthor. Lex has a gunman for a personal body guard along with him, but he has nowhere to run. In this tight space, you will have to face off with Lex and his gunmen until only one of you is left standing. The gunmen is easy to take out if you hit him three times. Lex on the other hand has a lot more health, and can take a lot more damage. Not only can he take more damage, he also deals quite a bit of it himself. He appears to hit Superman with some kind of club, but this is actually kryptonite, Superman's biggest weakness. If you have a good deal of Heat Vision power left, it's not a bad idea to use it all up fighting against Lex since it lets you hit him from a distance. Finish him off with punches. The Daily Planet will announce that Superman beat the fire beasts and that Lex has been arrested. The next ominous headline announces that monster gangs are on the loose!