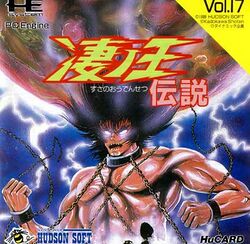 Susano-o Densetsu (凄ノ王伝説, Susano-o Densetsu? lit. Legend of Susano-o) is a turn-based strategy RPG based on the Go Nagai manga Susano-o, originally developed by Alfa System and published by Hudson Soft for the PC Engine in 1989. Like another of Nagai's more famous works, Devilman, the hero of Susano-o is a regular Japanese high school student that discovers an awesome and terrifying power within himself and struggles to keep it under control. Rather than a demon, this power is that of the Shinto deity Susano-o who is reimagined as a legendary world-destroying giant.

The game is loosely based on the story of the manga, which was never actually completed. The player controls Susano-o in his awakened form and travels a post-apocalyptic world to track down and defeat the demons who had caused the world's end. While in towns the player can talk to NPCs, acquire quests, rest at inns and purchase items and equipment from vendors. On the world map between locations, the player can see monsters roaming around (not unlike Zelda II: The Adventure of Link) and will enter combat if they get too close. These fights are entirely tactical and require that the player move around an invisible grid and use the fight command on enemies in range; as the player levels up, they will gain more action points and will be able to attack and move more often per turn.