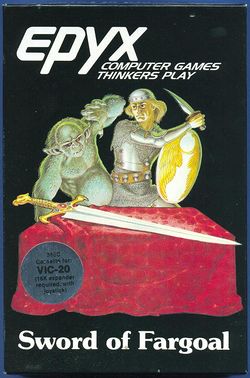 Sword of Fargoal is a roguelike game published by Epyx, originally released in 1982 on the VIC-20, and upgraded for the Commodore 64 in 1983. The game was later re-released for modern operating systems. In this game, your mission is to descend into the dungeon and retrieve the Sword of Fargoal, then return to the surface before the dungeon collapses.

In the game, the player controls a warrior who explores numerous dungeon levels in search of the legendary "Sword of Fargoal" artifact. The levels become progressively harder to survive as the player descends deeper and deeper into the dungeon. Each dungeon is covered in complete darkness that illuminates as the dungeon rooms and corridors are explored. When the Sword is successfully found, a clock countdown begins where the player must escape the dungeon before the time expires, or the Sword is lost.

The warrior gains character levels (similar to the classic Dungeons & Dragons role-playing game) by gaining experience points which increases the character's fighting ability and health points (called Hits) as he progresses through the dungeon. There are several items in the dungeon that help the character which can be found in treasure chests or on slain adversaries.