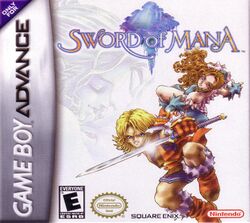 The story follows two (unnamed) characters of which the player chooses one to control. The two characters stories and dialogue differ, depending on who you choose to play as, so there are two save slots to maximize your experience of the game (and save players from having to delete prior game data).

Players are able to alternate between playing one character and the other on the field and in battle, but they cannot change the default weapon or magic of their sidekick. The Heroines' default weapon is the staff and the Heroes' is the sword, although the main character can change their weapon and even refine it to bring out different properties.

It was originally thought that the game would support some form of multiplayer capability. However, the only connectivity feature supported was a form of information exchange to enhance the power of the characters. The box did not adequately reflect this, leaving some players confused.

Differences between the remake and the original[edit]