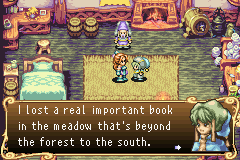 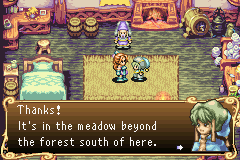 Save at the golden Mana Goddess, note that Niccolo (the fat rabbit-cat thing muttering darkly in front of the statue) is ticked off about not being able to sell a notebook. If you try to leave again through the north-west exit Niccolo will stop you and try to sell you the Popoi's Handbook. Purchase it of him for 10 lucre and he'll head off, leaving you to explore the town.

In the upper floor of the inn (which is just right of the golden Mana Goddess statue) there is a chest which has a Gumdrop in it, which is always nice to have.

Go to the house just below the inn. Inside is a little boy and his grandfather. You don't have to talk to the Grandpa, but speak with the little boy. The kid left his book out in the meadow amongst the grass, and would you, a complete and utter stranger, please get it for him? Answer 'yes'.

There are a few other people in the town, one who says something about the sage Cibba, another about the cave being sealed, and there's a couple of side quests here too. Make sure you talk to all the townspeople or else you won't be able to proceed further into the game later on.

Leave town at the south end of Topple.

Bebes
Bebes (wasps) only come out in the day. These shoot spikes which cause 3-5 points of damage. They also have a chance of poisoning you.

The monsters out here start getting a little harder, they are a good way to level up but watch out your HP doesn't get depleted. Use Wisp magic to kill them if their evasion is too high to beat up with the staff.

Batmos
Batmos outside only come out at night. These hit for 3-7 points of damage and can blind you, causing you to go in the opposite direction. They also have very high evasion.

Go back to the previous screen and head down the ramps and exit south then south-east. Make sure that your HP and MP is full before going up north-west to the Meadow.

Enter the inn either in the evening or at night and go to the sleeping quarters. Speak with Blassie the Third and he'll ask you to bring him a Blood Pouch from the bats in the cave. He'll offer you 100 lucre for every pouch you bring him.

Visit the general store during the day and speak to little boy called Luke. He'll ask you to go find his father Marco in Wendel and gives you a Barbecued Newt to give to him.