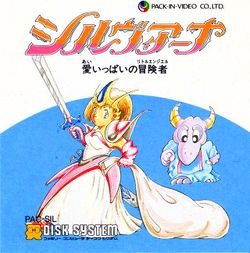 Sylviana: Ai Ippai no Boukensha (シルヴィアーナ 愛いっぱいの冒険者, Sylviana: Ai Ippai no Boukensha? lit. Sylviana: Adventurer Full of Love) is an adventure game developed by Pack-In-Video, and published for the Famicom Disk System in 1988. It was later published for the MSX2 with several visual enhancements over the Famicom version, as well as FM stereo sound. The name of the game is also often translated as Silviana.

The game borrows it's combat system from games like Hydlide and Ys: Ancient Ys Vanished, where damage is inflicted upon (and exchanged with) enemies by crashing into them. However, there are no levels or experience points, so Sylviana's power only grows by virtue of the improved equipment that she purchases or finds. Throughout the game, the player wanders around a world map in order to find towns where goods may be purchased, and caves or towers which must be explored to find treasure. Eventually, the player enters a cave and steps through a mirror to enter the mirror image of the original world map, with increased difficulty.

The game was never released outside of Japan. However, both versions of the game have been translated by fans. The patch for the Famicom Disk System version can be found here, while the patch for the MSX version can be found here. The 1991 action arcade game Sel Feena was designed by the same person, and as a result, features characters that bare a strong resemblance to characters found in this game.

Sylviana lived with her mom in relative peace after her father passed away. One day, her mom came down with a mysterious illness. Despite everything Sylviana tried, her mother's condition only got worse. Then one day, she heard a rumor about a Dr. Doppler, who can create a medicine that will cure any disease. She decides to head out and find this Dr. Doppler, and convince him to give her the medicine. However, she soon finds out that the doctor is unable to help her, due to having had his eight treasures stolen from him by demons. Sylviana vows to return the treasures to him in exchange for the medicine.