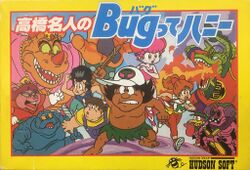 Takahashi Meijin no Bug-tte Honey (or Takahashi Meijin's Bug-tte Honey) is an action game developed by Hudson Soft for the Famicom in 1987. It is based upon an anime of the same name, which features a cast of characters that includes Takahashi Meijin, the main character and hero of the Adventure Island series, as well as redesign of the honeygirl fairy known as Bug-tte Honey (pronounced Bugute). Fan dubs call her Honey Bee. In the anime, Takahashi and Honey get into various adventures along with three ordinary school children from Earth. Many of the episodes reference other popular Hudson Famicom titles such as Bomberman and Lode Runner.

While the game draws inspiration from the anime (which itself drew inspiration from Adventure Island) the game does not necessarily follow any of the episodes of the show. Instead, the game consists of four stages. In the first stage, you control Bug-tte Honey, who has the ability to fly about the screen. At the end of the first stage, Honey rescues Takahashi by smashing the cage he is being held captive in. From that point forward, the player controls Takahashi. In each stage, the player must reveal the locations of eight hidden eggs which, when collected, send the player to a Breakout/Arkanoid-like stage. In these stages, four different letters will drop from the blocks, but only one letter is safe to catch. Catching any of the others costs the player one life. In order to progress from one stage to the next, the player must know which letters to catch. Each of the eight letters per stage spell out a password.

The game was never released outside of Japan, possibly because the anime was not broadcast outside of Japan either. However, the game is completely playable by English speaking players.