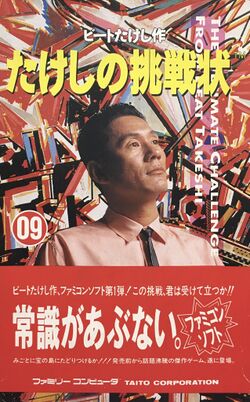 Takeshi no Chousenjou (translated as Takeshi's Challenge) is a Japanese action-adventure game for the Famicom developed by Taito Corporation. The game was developed under the direction of comedian-turned actor and film director Takeshi Kitano (Beat Takeshi), and was only released in Japan on December 10, 1986.

Though other video games bearing the names of Japanese celebrities had been developed prior to Takeshi no Chousenjou, Kitano was the first celebrity to actively contribute to the game's development. The packaging contains several warnings that the game should not be attempted with conventional gaming skills, and that the player must perform numerous near-impossible tasks in order to complete the game. The game placed first in Famitsu magazine's kuso-gē (クソゲー, kuso-gē? "crappy game") ranking, and is often referred to as one of the worst video games of all time. On the other hand, it left a strong impact on some critics, and in 2007, it was nominated for the 2007 Retro Game Award at the Tokyo Game Show, along with Spelunker, Adventure Island, and Ghosts 'n Goblins. (Super Mario Bros. won the award). Though Kitano was involved in a scandal concerning the Japanese gossip magazine Friday on December 9, 1986; a day before the game's release, Takeshi no Chousenjou was released as scheduled the following day.

The game was originally planned as a Famicom version of Kitano's television show, Takeshi's Castle, before Kitano contacted the game designers about ideas for a new game. The game's basis of being able to exert violence on all characters is similar to that of the Grand Theft Auto series. However, many of Kitano's ideas were rejected either because of the limitations of the Famicom game system, or because the content was not suitable for young children. Two more games bearing Kitano's name were developed after Takeshi no Chousenjou (Takeshi no Sengoku Fuunji and Family Trainer Totsugeki! Fuun Takeshijou), but Kitano himself was not involved in the development of either of these later games. Approximately 800,000 copies of the game were sold, making it a hit comparable to Dragon Quest.

Two television commercials were created to advertise the game; one where Kitano is singing karaoke while playing the game, and another where he yells "Come out!" at the microphone in the Famicom's second controller to pull up a treasure map on the game screen. Both commercials are hints for completing the game.

Kitano incorporated many of his unique and controversial ideas into the game. For instance, the player can beat up a yakuza gangster at a pachinko gambling establishment, and take the yakuza's money to exchange for prizes. The player can use a hang-glider to fly over into a strange land called the "Red Country" (an amalgam between the Soviet Union and Nazi Germany). The player can gain access to the Red Country if they pass over the four other islands, but a huge mountain blocks the way into the country, and the player will be forced to crash into either the mountain or the ground, resulting in an automatic game over screen. There is also a choice on the starting menu screen which also results in an automatic game over, even when the player has not even started the game. Other in-game events include: a game over screen where the player's character is given a funeral, singing karaoke at a pub (using the second-controller's built-in microphone), the main character divorcing his wife and paying a settlement, beating up yakuza, or seeing inhumane comments on store signs.

The game's plot, where a despondent salaryman seeks to find a hidden treasure on an island, is introduced as having been created by Kitano while he was drunk at a bar. However, Kitano himself explained that the plot was solely the result of an hour-long talk at a cafe near his production company.

Completion of the game requires several unorthodox uses of the Famicom system, such as using the second controller microphone to speak while playing pachinko, or not touching the controls for 60 minutes. The player must also maneuver a hang-glider to complete a side-scrolling shooting game, made extremely difficult because the controls do not allow the player to move upwards on the screen. Minor details such as not quitting the salaryman job, not getting a divorce, or not beating up the old man who provides the treasure map, can prevent the player from reaching the ending.

One event requires the player to use the second controller's microphone to sing a verse of karaoke. The player must receive a good rating in order to continue, but the microphone feature was removed in updated versions of the Famicom. Other games substitute the use of the microphone by pressing down the Select button on the controller, but in Takeshi no Chousenjou, microphone use is substituted by pressing the A button while holding down on the keypad of the second controller. Though the microphone is used to determine the presence of sound, the game does not have the technology to process sound pitches, making it possible to "sing" just by blowing air on the microphone with proper timing. Throwing 20,000 punches on the opening game screen will take the player directly to the game's ending.