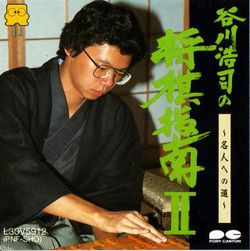 Tanigawa Kouji no Shogi Shinan features Shogi legend Kouji Tanigawa, a top ranked player in Japan, as a teacher to the player on how to play Shogi, and how to deal with difficult situations that arise in the game. This game saw multiple releases on Nintendo's home console. The original release was published on the Famicom Disk System with the subtitle Meijin he no Michi (名人への道, Meijin he no Michi? lit. Expert's Course). Then, in 1988, it was published again in cartridge format for the Famicom. Other than the format, these two releases were identical. However, later that same year, the game was republished for the Famicom Disk System, this time containing a different selection of puzzle arrangements on the B side of the disk than those found in the previous disk or cartridge version. The second disk version was subtitled Tsume Shogi (詰め将棋, Tsume Shogi? lit. Shogi puzzle).