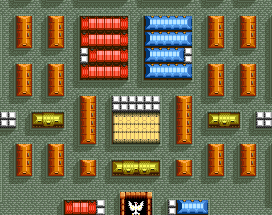 The enemies are few here and headquarters is well-protected with steel walls. It's easy just to roam around and kill every enemy passing by and collecting valuable weapon power-ups. 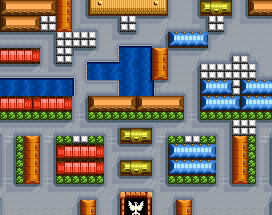 At some point, you'll most likely receive airstrike power-up which makes this level considerably easier. 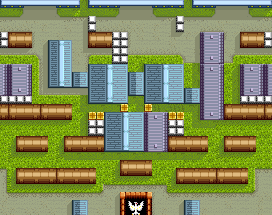 This level is rather cluttered with tons of buildings but shouldn't pose much of a threat. 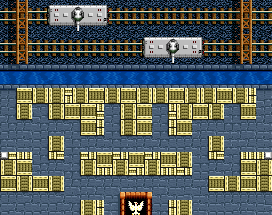 Fourth round introduces the first boss. Fortunately, this is easy compared to some of the later ones. 2 light armoured wagons patrol on northern side of the stage. Normal enemies appear from sides and it's easy to shoot them down very quickly. 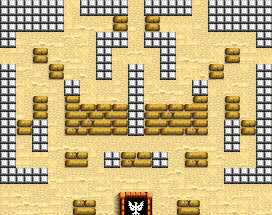 This level has quite a tricky design with no larger fire corridors to shoot the enemies from, unless maximum firepower which allows to create a decent fire corridor. The saving grace is that the enemies run out of forces very quickly and most of the enemies are basic tanks with only a few fast tanks. End of round 5 introduces a flame tank, which, fortunately, is the only one in this round. 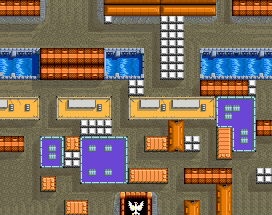 This stage features some water bodies and lots of buildings. Your base is fortunately heavily protected. 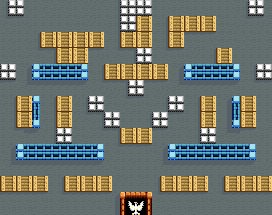 A moderately challenging level. Most of the enemies either tend to drive to the small central area but a few coming down along sides of the map, leaving the base quite vulnerable from all 3 sides. Fortunately, this round isn't a very long one and in 3rd part of the end of the level, jeeps show up which generally aren't that dangerous. 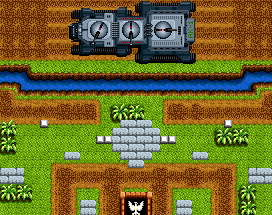 Introduction to AK-1 vehicle. This massive vehicle has 3 turrets which must be destroyed to finish the vehicle. Turrets of this vehicle shoot when they point downward. Apart from the AK-1, the only other enemies are jeeps which appear 1 at a time when all the turrets of AK-1 are present. 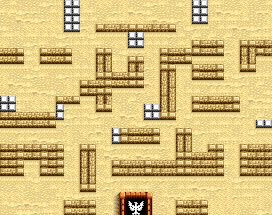 This level is fairly easy. The main threat comes from armoured tanks at the beginning of the stage. They'll soon be replaced with basic tanks. In a final third of the stage, light missile launchers make their first appearance. 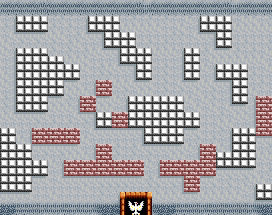 Steel walls with some bricks dominate this area. At the start of the round, you'll be greeted with several flame tanks. As battle progresses, they're replaced with fast tanks mixed with armoured tanks. Near the end of the stage, basic tanks with fast tanks show up. 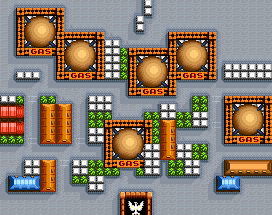 This stage has 6 gas tanks in it. Some more conveniently placed than others. Otherwise the stage is pretty cramped and alleyways are narrow. Fortunately, most of the enemies here are basic tanks with a few fast tanks accompanying them. 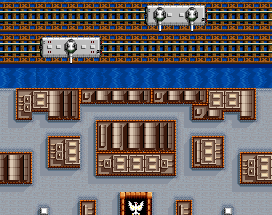 This is the second railway boss level, where the boss on the north consist of 1 light armoured wagon and 1 heavy armoured wagon. Although still beatable, it's much harder than the first railway boss round. Not only has the boss firepower increased, a clear fire corridor near the enemy respawn points is also absent and thus the main threat comes from the normal enemies who can easily attack your base. Luckily, 2 small steel blocks on the southern edge of the stage are so conveniently placed that some of the enemies get stuck (mainly armoured tanks), allowing you to have several cheap shots on them.