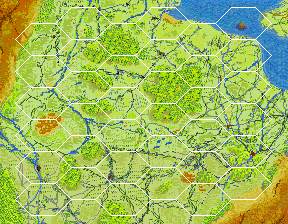 Namco's 1991 multi-directional shooter arcade game Tank Force (which was the last game to run on the company's System 1 hardware) is divided into thirty-six rounds. The image shown above is of the game's overworld map. After each round is cleared, the game will show the amount of points that each player scored on that round along with their current rankings from 1st to a minimum of 4th.

The player who manages to score the highest amount of points on any round in the game will receive a flag on its conquered hexagon (the colour of which is identical to that of their tank), and the player who receives the highest amount of flags on the rounds' conquered hexagons will be proclaimed the "Top Player" after the thirty-sixth and final round is cleared - however, as with the original Tank Battalion arcade game, destruction of the headquarters will immediately end the game, regardless of how many lives the players have remaining.

When player and enemy are facing each other while they both shoot projectiles, these cancel each other out. Use this for your advantage since you can shoot bullets more frequently than the enemy. Be wary of these situations when facing with an enemy with stronger firepower though.

When player and the enemy are positioned like this, they are both vulnerable to shots of each other. This can be used as player's advantage by quickly moving sideways but this situation is better to be avoided.

When player and the enemy are positioned like this, player is in large advantage since having a free shot without retaliation. There are several rounds in the game where this can be used more commonly than other rounds. Avoid the opposite situation whenever possible.

You'll notice that you'll kill most of the enemies by shooting their sides as they're passing by. By waiting just around the corner, you can take out enemies very quickly. Especially useful against enemies who take multiple shots to destroy.

Sniper hole tactic is especially useful (and sometimes invaluable) against bosses, but can be used in many other situations. This makes bosses or other enemies being on the other side of sniper hole not being able to fire at your corner due to protective cover left and right. Any projectiles that go through sniper hole, can be neutralized by player. 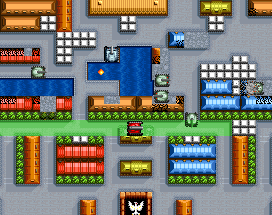 Fire corridors are areas which player can cover with their projectiles without moving. It's good if enemies have to stay in the fire corridor as long as possible to take them down. Third firepower upgrade is extremely useful for fire corridors in some levels to cover up as much area as possible. It's advised to leave a fire corridor only when collecting some powerups and when enemy is slipping past it.

Each round has its specific maximum amount of enemies that can appear onscreen with no more spawning until the previous enemies have been destroyed. Bosses or their turrets also count towards the number of enemies onscreen.

Having more players adds extra enemies per round as well as increases the maximum amount of enemies attacking at the same time. For an example, round 5 contains only 1 big tank when playing alone but with 4 players the amount of big tanks is increased to 9.