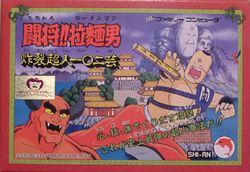 The game follows the eponymous warrior Ramenman as he attempts to track down his father's killers and bring them to justice with his many years of martial arts training. Notably, this game is the first true point-and-click adventure game for the system. While there had been many adventure games made for the NES, such as Portopia Renzoku Satsujin Jiken or Princess Tomato in the Salad Kingdom, they are largely driven by menus. Ramenman is directed by using the cursor to select an area to walk to or interact with instead much like classic Sierra adventure games such as King's Quest.