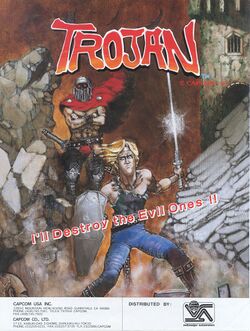 Trojan is a 2D, side scrolling video game similar to Tiger Road, or Kung-Fu Master. It was developed by Capcom and published in Japan in 1986 as Tatakai no Banka (translated as "Requiem for Battle" or "Battle Elegy"). It was later released in the United States by Romstar.

Capcom later published the game for the Famicom/NES platform, where the graphics were simplified, but certain aspects of the gameplay were expanded. The arcade game is included in the 2005 compilation Capcom Classics Collection for the PlayStation 2 and Xbox.

The story describes a post-apocalyptic world in the near future, devastated by Demonic-influence of evil sects and by Wars. The spirits of warlords from past ages have been brought back to life, destroying civilization with disease and insanity. The bodies of the strongest survivors, the "chosen", are possessed by these violent spirits to rule the small, peaceful tribes with an iron fist. (Similar plot to Mad Max, Fist of the North Star, or Cyborg).

The supreme leader of this new order is known as Achilles.

You play as a young warrior resistant to the evil spirits, trained in martial arts, who has taken the battle-name Trojan.

Your mission is to infiltrate the lands of the evil army, fighting against pirates and gladiators and exorcising these human-demons from the earth in a gothic/industrial wasteworld.